Early Life: Catherine Elizabeth Middleton was born on January 9th of 1982 in Reading, England. Although she would later become a member of the royal family, Kate was raised in an upper-middle-class household among two other siblings. Kate's mother launched a successful business called Party Pieces. The company sells party supplies and was worth around $45 million as of 2011. With all that said, she does have strong ties to royalty on her father's side. The Middleton family was closely interacting with members of the royal family as early as 1926. Multiple generations of the Middleton family have also benefited from trust funds set up over a century ago.

When Kate Middleton was 2 years old, her family moved to Jordan, where her father worked for British Airways. After returning home to England at the age of four, Kate Middleton was enrolled in St. Andrew's School. She later studied at elite boarding schools such as Downe House School and Marlborough College before moving on to the University of St. Andrews in Scotland.

Career: From 2006 to 2007, Kate worked for Jigsaw, a fashion retailer. She worked for the company as a procurer of jewelry. In 2011, she worked for her family's company, Party Pieces.

Relationship with Prince William: Kate Middleton and Prince William first met in 2001, when they were both students at St. Andrews. Allegedly, Prince William attended a fashion show in which Kate Middleton wore a transparent dress, sparking his interest. By 2003, they had started dating. In their second year at St. Andrews, Middleton and Prince William were roommates together with two other students. Around this point in time, Kate Middleton began to suffer harassment from media sources. This prompted a number of individuals to threaten legal action, including members of the royal family and Kate's family lawyer. In 2007, Kate and William ended their relationship for reasons unknown. However, rumors continued to circulate not long afterward that they had got back together.

In 2010, Kate Middleton officially became engaged to Prince William. In 2011, their marriage was broadcast live to an estimated audience of 300 million. After their marriage, the royal couple toured Canada. Kate is one of the few "commoners" to marry into the royal family. In 2012, Kate announced that she was pregnant with her first child. Prince George was born in 2013. She gave birth two more times before 2018, welcoming Princess Charlotte and Prince Louis into the world.

After marrying William, she assumed the title "Her Royal Highness The Duchess Of Cambridge." Despite her title of Duchess, she is also a princess of the United Kingdom. When she travels to Scotland, her title becomes the Countess of Strathearn. If Kate happens to be in Northern Ireland, she is referred to by a third title, "Lady Carrickfergus." 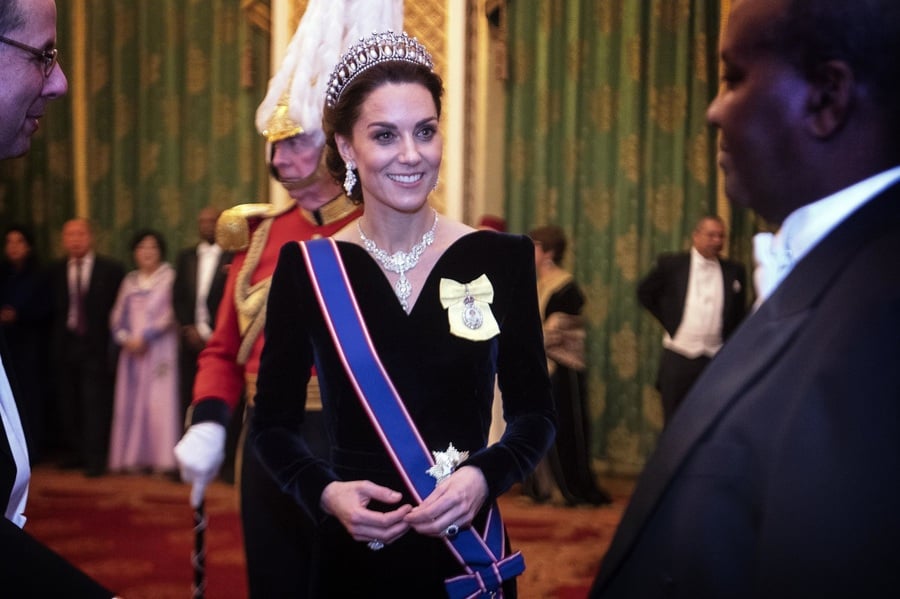 Charity Work: Kate Middleton and Prince William started engaging in charity work together even before they were married. They set up a fund through William's existing charity so that people could donate money on their behalf, in lieu of a wedding gift. Following this, Kate Middleton focused on charity work related to small children and addiction issues. Her patronages include East Anglia's Children's Hospice, Action on Addiction, and the Natural History Museum.

Through Action on Addiction, Middleton sometimes visits recovery centers and spends time with recovering addicts. She also gave her patronage to a program called Moving Parents and Children Together, or "M-PACT." This organization focuses on the impact of addiction on families. In 2019, she started supporting Backyard Nature, an organization that aims to get families and their children outside and connected with nature. Some of her most notable charity work also revolves around mental health. Kate, Prince Harry and Prince William all collaborated with 2016's "Heads Together" campaign, which encouraged people to speak out about their mental health problems. She also launched a project called Mentally Healthy Schools, which focuses on providing schoolchildren the resources they need to get help with mental health issues. She has also been involved with the Young Minds Matter Movement in 2016.

Public Image: Kate Middleton has been singled out time and time again for her impeccable sense of style. As early as 2006 and 2007, she had been declared a "fashion icon." She also continuously makes the "best-dressed" lists of various publications. In 2014, she was inducted into the International Best Dressed Hall of Fame. She is such an influential figure in the fashion world that items she wears often become best sellers in the next few weeks.

Issues With the Media: Considering previous issues with the late Princess Diana, the media frenzy surrounding Kate Middleton was somewhat expected. That being said, the media have, in the eyes of the royal family, crossed the line on more than one occasion in their obsession with Middleton. She was awarded a considerable settlement after she was photographed playing tennis without her consent. The offending press agency issued a public apology.

Things were taken a step further when Kate Middleton was photographed sunbathing topless in France. The owners and editors of the media publication Closer were both heavily fined as a result. Photographs were also published which showed Kate Middleton's dress flying up in the wind while she was hiking near Sidney, exposing her bare bottom.