What is Mitch McConnell's Net Worth and Salary?

Mitch McConnell is a conservative American politician who has a net worth of $35 million. Mitch McConnell has served in the United States Senate, both as the Minority and Majority Leader, and is the longest-serving Senator ever from the state of Kentucky.

Mitch McConnell was married to Sherrill Redmon from 1968 to 1980. They had three children together. He married Elaine Chao in 1993. Elaine served as Secretary of Labor under George W. Bush and Secretary of Transportation under Donald Trump.

Elaine's father James S. C. Chao is an extremely successful Chinese-American shipping magnate. James founded the Foremost Group, a New York-based shipping company which operates a fleet of 33 ships. Foremost is worth an estimated $1.2 billion before debt. After debt and an investments from China's Export-Import Bank and Taiwan's First Commercial Bank, the Chao family's stake in Foremost is worth an estimated $600 million. Elaine has one younger sibling, a sister named Angela, who serves as CEO.

Prior to 2007, Mitch McConnell's net worth was $3 million. In 2007, after receiving an inheritance, estimated at $5-25 million, following Elaine's mother's death, Mitch and Elaine's personal net worth jumped to $12.7 million. Today their net worth tops $35 million, which makes Mitch one of the richest members of Congress.

In 1956, his family moved to Louisville, Kentucky where he studied as high school at duPont Manual High School. He was elected president of the student council during his senior year. Following high school, he attended the University of Louisville where he earned  a Bachelor of Arts degree in Political Science in 1964 with honors. 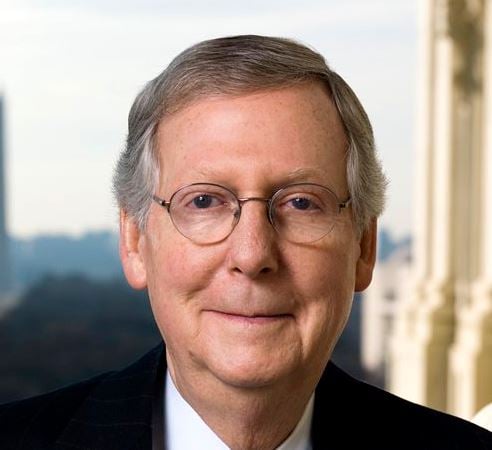 In 1967, McConnell enlisted in the US Army Reserve as a private. However, due to his condition of optic neuritis he was deemed to be medically unfit for the military service. From 1968 to 1970 McConnell worked as a chief legislative assistant for Senator Marlow Cook in Washington, D.C., where he managed a legislative department with five members while assisting with speech writing and constituent services.

In 1971, McConnell attempted to run for a seat as a representative in the State Legislature. However, he was disqualified due to non-compliance of the residency requirements for such office. Shortly after the loss, he decided to work for a law firm, Segal, Isenberg, Sales and Stewart, and also worked as a professor at the University of Louisville.

On October 1974, McConnell decided to return to Washington to fill a position as Deputy Assistant Attorney General under President Gerald Ford. McConnell then served as the Executive Judge in Jefferson County from 1977 to 1984. He then ran for a seat in the United States Senate against two-term Incumbent Walter Dee Huddleston to which he won by 3,437 votes out of 1.2 million votes that have been cast.

On January 3, 1985 he was elected Senator of the United States representing the state of Kentucky. In his early years, he was known as a pragmatic and moderate Republican but slowly has changed and shifted to the right, becoming more conservative over time.

From 1997 to 2001, McConnell was chairman of the National Republican Senatorial Committee. He developed a reputation as a skilled political strategist and tactician. He was first elected as a Majority Whip during the 108th Congress and was re-elected the following year. After the Republicans took over the Senate following the 2014 Senatorial election, he was voted as the Senate Majority Leader.

In June 2018, McConnell became the longest-serving U.S. Senator from Kentucky in history. During his tenure, he has become well-known for a variety of his conservative viewpoints. Though his views on topics like abortion, unions, and civil rights were more moderate in his early career, his views have evolved over time to become more socially conservative. He led the opposition against Obamacare during the Obama administration. McConnell also opposes stronger gun control measures and efforts to mitigate climate change. He supported President Trump's initiatives to strengthen border security, promote free trade agreements, and reduce taxes, including the Tax Cuts and Jobs Act of 2017. He also supported the Iraq Resolution, authoring American military action against Iraq. He has been highly critical of various Democratic proposals for legislation around universal healthcare and green energies.

In the year 2020, McConnell faced Democratic nominee Amy McGrath, a former Marine, and libertarian nominee Brad Baron, farmer businessman, in the 20202 election. McConnell was elected to his seventh term on November 3 when he defeated McGrath. In his career as a Senator from Kentucky, he has managed to win every county in the state.

Though conservative, McConnell's relationship with President Trump became quite strained throughout Trump's presidency and devolved further once Joe Biden won the 2021 Presidential Election. Though he initially refused to acknowledge Biden's win, McConnell later did congratulate President Biden and also criticized Trump for his actions preceding the storming of the United States Capitol in 2021.

McConnell married his first wife, Sherrill Redmon in 1968. The couple had three daughters together before divorcing in 1980. Redmon has since gone on to pursue feminist scholarship at Smith College. McConnell married his second wife, Elaine Chao, in 1993. Chao served as the Secretary of Labor under President George W. Bush and then the Secretary of Transportation under President Donald Trump.

McConnell founded the James Madison Center for Free Speech in Washington D.C. in 1997, an organization devoted to legal defense. He also was inducted into the Sons of the American Revolution in March of 2013 and serves on the Board of Selectors for the Jefferson Awards for Public Service.

McConnell is known to be one of the wealthiest members of Congress. His wealth further increased in 2008 following a personal gift from his father-in-law, James Chao, following the death of his wife's mother. He was listed by "Time" magazine as one of the 100 most influential people in the world in both 2015 and 2019.