What is Laura Bush's Net Worth?

Laura Bush is an American public figure who has a net worth of $40 million. Laura Bush served as first lady of the United States from 2001 to 2009 during her husband's, George W. Bush, presidency. She is also a memoirist, author, and librarian.

Bush was born on November 4, 1946 in Midland, Texas and given the name Laura Lane Welch. She is the only child of Harold and Jenna Welch and is of English, French, and Swiss ancestry. Her father worked as a builder and real estate developer and her mother worked as the bookkeeper for Harold's business.

She attended James Bowie Elementary School and then Robert E. Lee High School in Midland, Texas. When she was 17, she ran stop sign and struck another car, resulting in the death of the driver. Bush was devastated, as the other driver was her close friend from school, Michael Douglas. Bush has stated the accident affected her deeply and caused her to lose her faith for a long time.

After graduating from high school, she enrolled at Southern Methodist University in Dallas and earned a bachelor's degree in education. She then became a school teacher in the Dallas Independent School District. In 1973, she enrolled at the University of Texas at Austin where she earned her Master of Science in Library Sciences. She then became a librarian and worked in Houston and Austin.

In 1977, she met George W. Bush through mutual friends. They began dating and were engaged by September and married in November.

Shortly after their marriage, Laura joined her husband's 1978 campaign for Congress. Though he won the primary, he lost the general election. The couple remained involved in politics and remained in the public eye, however, as George's father, George Bush, Sr. became the President in January of 1981. Laura appeared at a number of political events and also traveled with the family abroad occasionally on official business.

Laura became the First Lady of Texas in January of 1995 after her husband was elected the Governor of Texas. She remained in that position until December of 2000. During her years in the Governor's mansion, Laura devoted herself to various education, literacy, and health causes, though she was not particularly interested in political life and never held a formal event at the mansion. She joined her husband on his campaign for presidency, which he won. In January of 2001, George W. Bush became President of the United States and Laura assumed the role of First Lady. In this role, she focused much of her attention on education and remained rather uninvolved with the political aspects of the role. 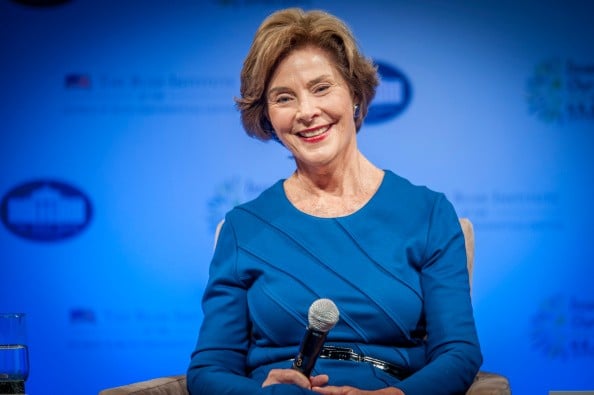 Following their marriage, Laura and Bush began trying to conceive but had trouble for three years before getting pregnant with fraternal twins. On November 25, 1981, Laura gave birth to Barbara and Jenna in Dallas, Texas. The twins joined a large family, primarily on the Bush side, many of whom gather multiple times a year at Walker's Point, a sprawling family estate in Kennebunkport, Maine where generations of the Bush family have been meeting for a 100 years. The Bush's also have a ranch in Texas.

Throughout her time in the political and public sphere, Laura has devoted herself to championing several causes that are near to her heart. She has focused much of her attention on education, both as First Lady of Texas and the United States. She is responsible for launching the National Book Festival and she became the honorary ambassador for the United Nations' Decade of Literacy. She also created the Laura Bush Foundation for America's Libraries which grants annual awards of over $1 million to schools around the country.

She has also been involved in various women's health movements, particularly those focused on breast cancer and heart disease. She became involved with The Heart Truth awareness campaign as well as the Susan G. Komen for the Cure campaign. In August of 2007, the Laura W. Bush Institute for Women's Health opened at Texas Tech University as a center devoted to research and education around women's health issues.

Laura has published a number of books about her life and causes she cares about. She co-wrote her first book with her daughter Jenna in 2008 called "Read All About It!" She then published her memoir, "Spoken from the Heart," in 2010, which was positively reviewed by readers and was a Goodreads Choice Award Nominee for Memoir and Autobiography. In 2016, she published her first non-fiction book entitled "We Are Afghan Women: Voices of Hope" which details the true account of oppressed women in Afghanistan. She has also written a children book with Jenna called "Our Great Big Backyard."

Laura's efforts and advocacy in education have been recognized, as she has received multiple awards and honors. She was the recognized by the Elie Wiesel Foundation for Humanity in 2002 for her efforts in improving education. She has also been honored by the American Library Association. Numerous libraries and education facilities around the world, and especially in Texas, have been named in her honor. In October of 2015, she received an honorary Doctor of Letters from Wayland Baptist University to recognize all of her work and advocacy on behalf of education and health care. Along with former President Bush, she also received the National Constitution Center Liberty Medal for the work the couple has done with military veterans. In 2021, she received the Concordia Leadership Award.