Dick Cheney Net Worth: Dick Cheney is an American politician, author, and business executive who has a net worth of $100 million. Cheney served as the 46th Vice President of the United States under President George W. Bush and many consider him the most powerful vice president in the history of America. Cheney is best known for his long career within the Republican party, but his $100 million net worth reveals lucrative roots in the private sector.

The vast majority of Dick Cheney's wealth is attributable to the years he spent as CEO of oil services contractor Halliburton. Cheney was CEO from 1995 to 2000. According to financial disclosures released in 2000, Cheney earned $72.5 million in total compensation during those years. That includes $12.5 million in base salary, $20 million in retirement benefits and $40 million in stock options. During his time in office Dick earned several million in deferred compensation, retirement benefits and bonuses from the company. The year before Cheney became Vice President, Halliburton was the 22nd-largest military contractor in the US. By 2003, they were the seventh.

According to his 2008 wealth disclosure, Cheney's net worth at that time ranged fro $20 million to $100 million. By comparison, President George W. Bush was worth $7 million to $20 million at the time.

Early Life and Education: Dick Cheney was born Richard Bruce Cheney on January 30, 1941, in Lincoln, Nebraska. He grew up in Casper, Wyoming, with mother Marjorie, father Richard, and 2 younger siblings, Bob and Susan. Richard worked for the U.S. Department of Agriculture as a soil conservation agent, and Mary had been a successful softball player in the 1930s. Dick attended College View Elementary School (now called Calvert Elementary School) in Lincoln and Natrona County High School in Casper, where he was senior class president and captain of the football team.

After graduating from high school, Cheney attended Yale University but dropped out less than 2 years later due to poor grades. After leaving Yale, he was arrested twice for driving while intoxicated in 1962 and 1963. He later attended Caspar College and went on to graduate from the University of Wyoming with a Bachelor of Arts and Master of Arts in political science. He began studying for a doctorate at the University of Wisconsin–Madison but dropped out in 1966 to take a job as a staff aide to Governor Warren Knowles.

Political Career: In 1968, Cheney was awarded an American Political Science Association congressional fellowship and moved to Washington, DC, to work as an intern for Congressman William Steiger. From 1969 to 1970, Cheney worked under Donald Rumsfeld in the Office of Economic Opportunity, and in the following years, he served as a White House Staff Assistant and Assistant Director of the Cost of Living Council. During Gerald Ford's administration, Cheney served as Deputy Assistant to the President and later became Assistant to the President and White House Chief of Staff. He also worked as the campaign manager for Ford's 1976 presidential campaign.

Cheney was elected to the U.S. House of Representatives in 1978, representing his home state of Wyoming. He was re-elected 5 times and served as Chairman of the House Republican Policy Committee from 1981 to 1987. Cheney was elected House Minority Whip in 1988 but left the House of Representatives in 1989 to serve as George H.W. Bush's Secretary of Defense, a position he held until 1993. During Dick's time as Secretary of Defense, he directed military campaigns Operation Just Cause and Operation Desert Storm and was awarded the Presidential Medal of Freedom and the U.S. Senator John Heinz Award for Greatest Public Service by an Elected or Appointed Official.

Private Sector Career: Cheney left the Department of Defense after Bill Clinton took office in 1993. Dick joined the American Enterprise Institute and served his second term as a director of the Council on Foreign Relations from 1993 to 1995 (he served his first term from 1987 to 1989). From 1995 to 2000, Cheney served as CEO and Chairman of the Board for the oilfield services company Halliburton and reportedly received a $20 million retirement package when he resigned to join George W. Bush's administration. In 2002, Halliburton's shareholders filed a class-action lawsuit, accusing the company of securities fraud; the lawsuit was settled for $100 million in 2016. In 2010, the Nigerian government filed corruption charges against Cheney and Halliburton; the charges were dropped when the company agreed to pay a $250 million settlement.

Vice Presidency: Cheney served as George W. Bush's vice president from 2001 to 2009, actively and openly influencing White House policy, particularly surrounding foreign policy, environmental policy, and the treatment of prisoners of war. Cheney was instrumental in the administration's approach to the "War on Terror," publicly claiming that Iraq had weapons of mass destruction and ties to Al Qaeda. Twice during his vice presidency, Cheney assumed the role of acting president as Bush underwent minor medical procedures requiring sedation: from 11:09 a.m. to 1:24 p.m. on June 29, 2002, and 7:16 a.m. to 9:21 a.m. on July 21, 2007.

While Cheney was visiting Afghanistan's Bagram Airfield on February 27, 2007, a suicide bombing occurred outside the front gate, killing 23 people and wounding 20. The Taliban claimed responsibility, saying that Osama Bin Laden had authorized the attack and that Cheney was the intended target. During his time in office, Cheney was often criticized for his support of the administration's "enhanced interrogation program," which involved waterboarding captured terrorists, and his approval rating was only 13% when he left office. 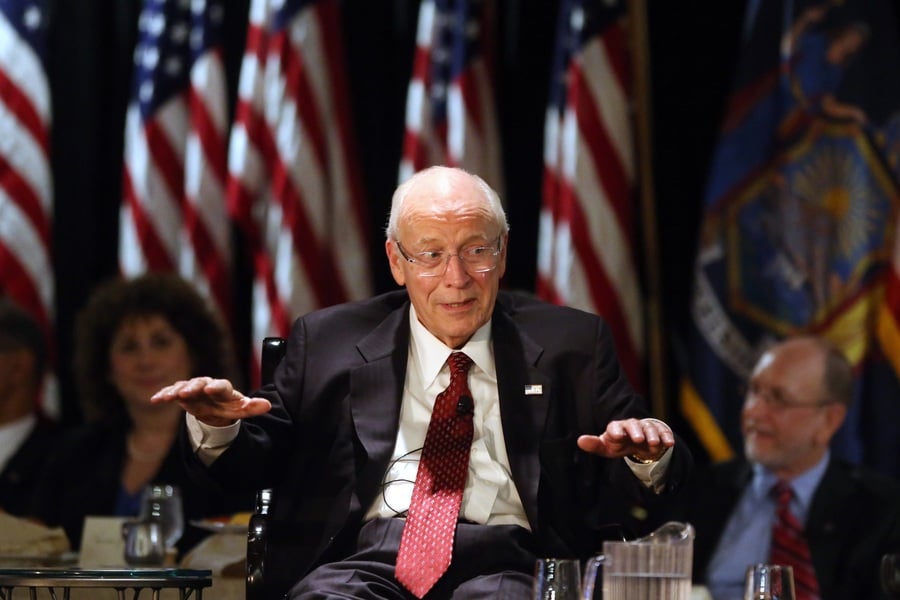 Post-Vice Presidency: After the Bush administration, Cheney left public office. He wrote 2 books with his daughter Liz: 2011's "In My Time: A Personal and Political Memoir" and 2015's "Exceptional: Why the World Needs a Powerful America." Cheney underwent a heart transplant on March 24, 2012, 2 years after his fifth heart attack.

Personal Life: Dick married Lynne Vincent, his high school sweetheart, in 1964. They have 2 daughters: Elizabeth, born on July 28, 1966, and Mary, born on March 14, 1969. Liz took over her father's former congressional seat in 2017, and Mary was the Director of Vice Presidential Operations for Bush and Cheney's re-election campaign. Liz is married to Philip J. Perry and has 5 children, and Mary and wife Heather Poe have 2 children. After leaving office, Cheney spoke out in support of same-sex marriage, and in 2012, he encouraged Maryland lawmakers to legalize it.

On February 11, 2006, Cheney accidentally shot acquaintance Harry Whittington while hunting quail in Kenedy County, Texas. Whittington had birdshot wounds to his chest, neck, and right cheek, and due to a pellet's proximity to his heart, he had a heart attack and atrial fibrillation on February 14th. Whittington survived, and Cheney was cleared of criminal wrongdoing by the Kenedy County Sheriff's Office.