What was Hugo Chavez's Net Worth?

Hugo Chavez was a Venezuelan politician who had a net worth of $1 billion at the time of his death on March 5th, 2013. When he died, Chavez had been the President of Venezuela since February 2, 1990.

A 2010 report from Criminal Justice International Associates (CJIA), a global risk assessment and threat mitigation firm estimated that the Chavez family assets totaled between $1 and $2 billion USD. The vast majority of these assets are oil-related and were controlled by Hugo himself prior to his death.

The head of the CJIA, Jerry Brewer, asserted that since Hugo's rise to power in 1999, the extended family has amassed its fortune through both legal and illegal methods. Brewer further estimates that the Chavez family and hundreds of other criminal organizations have "subtracted $100 billion out of the nearly $1 trillion in oil income made by PDVSA (Venezuela's state-controlled oil company), since 1999."

Hugo Rafael Chavez Frias was born July 28, 1954, in the rural village of Sabaneta, Barinas State, Venezuela. Hugo was the second of seven children born to parents Hugo de los Reyes Chavez and Elena Frías de Chávez, who were both school teachers in the village of Los Rastrojos. At age 17, Chavez enrolled in the Venezuelan Academy of Military Sciences, graduating in 1975 as a sub-lieutenant with a degree in Military Arts & Sciences.

Upon completing his studies, Chavez entered active military service as a member of a counter-insurgency battalion stationed in Barinas. His military career lasted 17 years throughout which he held various positions, eventually rising to the rank of lieutenant colonel. Hugo also held a variety of teaching positions. In 1983, dissatisfied with the Venezuelan political system, Chavez held the Revolutionary Bolivarian Movement-200 (MBR-200) and in 1998 Chavez began to campaign for president. In 1992, Chavez led the MBR-200 into an unsuccessful coup against the Democratic Action government under President Andres Perez. He was imprisoned for this for two years until he was pardoned. He then founded the Fifth Republic Movement and continued to campaign for president. His public speaking style was noted for his flamboyant mannerisms and colloquialisms.

He worked to gain the trust of primarily poor working-class citizens. Chavez went on to win the 1998 election with 56% percent of the vote. The Venezuelan government adopted a new constitution in 1999 on the heels of the Bolivarian Revolution, and Chavez then focused on enacting social reforms.

Chavez was re-elected in 2000. Around this time, the Venezuelan government was recording record-high oil revenues, coinciding with the start of his term and resulting in improvements like poverty, income equality, and literacy, although these improvements were short-lived and lasted only between 2003 and 2007. He was voted president yet again in 2006, with 59.8 percent and 62.8 percent of the vote, respectively. On June 2, 2010,  Chavez declared an economic war on the upper classes of Venezuela due to major shortages of basic necessities and food that were occurring at the time, resulting in an increase in poverty and inflation.

Chavez once again won his fourth term as president in October 2012, with only 55.1 percent of the vote this time. His inauguration was postponed due to cancer treatment and he died on March 5, 2013, at the age of 58. 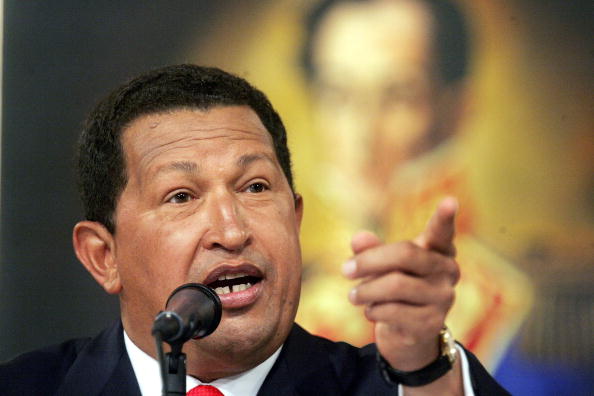 Over the course of his tenure, Chavez was instrumental in setting up the Community of Latin American and the Caribbean States, the Bolivarian Alliance for the Americas, the Union of South American Nations, the regional television network TeleSUR, and the Bank of the South. He founded the United Socialist Party of Venezuela and coined the term Chavismo based on his beliefs, practices, and ideas. Chavez was a self-described Marxist and aligned himself internationally with the Marxist-Leninist governments of Fidel and Raul Castro in Cuba. He described his policies as anti-imperialist and was an outspoken adversary in the U.S.'s foreign policy. He was also a critic of U.S. neoliberalism and "laissez-faire" capitalism.

Chavez's critics claim that the country experienced "Democratic backsliding" under his tenure and have also accused him of suppressing the press, enabling acts, and manipulating electoral laws. Critics also note that his government's use of propaganda was controversial and that under his presidency Venezuela saw increases in the country's overall homicide rate.

Chavez was married twice. His first marriage to Nancy Colmenares lasted 18 years, during which they had 3 children: Rosa Virginia, Maria Gabriela, and Hugo Rafael. Chavez cheated on Nancy for nine years with Herma Marksman. The couple separated after Chavez's coup attempt in 1992.

He was also divorced from his second wife, Marisabel Rodriguez de Chavez, and they also had one daughter together, Rosines. The couple separated in 2002 and divorced in 2004. After his release from prison, Chavez initiated affairs with women who were fans and followers of his. There are many allegations that Chavez was a womanizer throughout both of his marriages and had many sexual encounters with journalists, actresses, and minister's daughters. The allegations remain unproven.

Chavez was suspected throughout his life of having bipolar disorder by many close to him, and his physician Salvador Navarrete was one of those who felt he suffered from the disorder.

Chavez revealed in a television address from Havana Cuba in June 2011 that he was recovering from an operation to remove a cancerous tumor. It was reported the following month that Chavez had returned to Cuba for further treatment, despite the false rumors that he had been given the all-clear. In a public appearance on July 28, 2011, he stated that his health troubles had "led him to radically reorient his life." In July 2012, he declared himself fully in remission from cancer just three months before the 2012 election. He won, securing a fourth term as president, and announced plans to travel to Cuba in November 2012 for further medical treatment. He underwent another operation in December 2012 which he suffered complications from including a severe lung infection that caused respiratory failures.

Chavez returned to Venezuela in March 2012 after two months of cancer treatment in Cuba.  Just days later, he was suffering from another severe respiratory disease. Vice President Nicolas Maduro announced on state television on March 5, 2013, that Hugo had died in a military hospital in Caracas at 16:25 Venezuelan time. His actual cause of death was a massive heart attack, but his cancer was very advanced when he died. He left behind four children and four grandchildren. His death triggered a presidential election that had to be held within 30 days. Vice President Maduro was elected president on April 14, 2013.