What is Jennifer Lopez's net worth?

Jennifer Lopez is an American actress, singer, dancer, fashion designer, television producer, and businesswoman. Her career has spanned more than 25 years and today she is one of Hollywood's biggest A-list celebrities. As of this writing Jennifer Lopez's net worth is $400 million. That makes her $50 million richer than her former boyfriend Alex Rodriguez's $350 million net worth. When they were together, J-Lo and A-Rod had a combined net worth of $750 million.

Jennifer Lynn Lopez was born on July 24, 1969, in the Bronx borough of New York City. Her parents, Guadalupe Rodriguez and David Lopez, are Puerto Rican. She has an older sister named Leslie and a younger sister named Lynda. Her father worked the night shift at an insurance company. Her mother was a homemaker. The family lived in a small apartment in the Castle Hill neighborhood when Jennifer was born. A few years later, her parents bought a two-story house.

Jennifer started taking singing and dancing lessons when she was five. Her parents encouraged their three daughters to put on performances at home – singing and dancing in front of each other and their friends so that they would stay out of trouble. Lopez attended Catholic schools for her entire academic career. She did gymnastics, ran track on a national level, and was on her high school's softball team. During her senior year of high school, Lopez auditioned for and was cast in the low budget indie film My Little Girl. This experience made JLo realize she wanted to become a famous movie star. Her parents thought that was a "really stupid" idea because "no Latinos did that." To please her parents, she enrolled in Baruch College but dropped out after the first semester.

After that one college semester, Lopez moved out of her parents' house and into an apartment in Manhattan over disagreements about her desire to pursue a career in dance and acting. She soon appeared in regional productions of Jesus Christ Superstar and Oklahoma!. She was then hired for the chorus of Golden Musicals of Broadway, which toured Europe for five months. From there she got a job as a dancer, singer, and choreographer on the show Synchronicity in Japan. In 1991, she was a backup dancer for the New Kids on the Block and performed with them at the 18th Annual American Music Awards. Not long after that, she landed her job as a Fly Girl dancer on In Living Color. She beat out 2,000 applicants and moved to Los Angeles for the job. JLo remained a regular cast member through 1993 when she decided to pursue an acting career.

Lopez had minor roles in television shows and films from 1993 to 1995. Her breakout film role came in 1995 when she won the title role in the biopic Selena. In the movie, Jennifer played the late Tejano singer Selena who was gunned down by a former friend, employee and fan club president. Next, Jennifer went on to appear in Anaconda, Out of Sight, The Wedding Planner, and An Unfinished Life, among many other films.

In August 2003, Lopez starred opposite Ben Affleck in the romantic comedy Gigli. The film was a box office bomb and is considered one of the worst films of all time. The film's poor reception was attributed to negative press preceding its release, as well as the media attention surrounding Lopez and Affleck's engagement which largely overshadowed the film. Lopez would later describe this as the lowest point of her career. In March 2004, Lopez had a minor role in the film Jersey Girl, alongside Affleck. Her character dies during childbirth within the first 15 minutes of the film. From the intense media coverage following Affleck and Lopez's break-up, it was said that "they may need to put Lopez in a coffin on the poster if they want anyone to come."

In May 2005, JLo starred alongside Jane Fonda in the romantic comedy Monster-in-Law. The film's marketing played up Lopez's "Gigli-and-tabloid tarnished image," and was a box office success.

In 2016, Lopez starred as Detective Harlee Santos in NBC's crime drama series Shades of Blue, as a single mother and police detective who goes undercover for the FBI to investigate her own squad. Shades of Blue premiered on January 7, 2016, giving the network its most-watched Thursday debut in seven years with 8.6 million viewers. Shades of Blue was renewed for a second season, which premiered in March 2017. That same month, the series was renewed for a third season.

In 2019, Lopez starred in and executive produced the film Hustlers, which was inspired by a true story about a group of strippers in New York City who con wealthy men. Lopez's portrayal of a veteran stripper gave her her highest opening weekend at the box office for a live-action film with $33.2 million. Lopez was also nominated for Best Supporting Actress at the Golden Globes, Screen Actors Guild Awards, Critic's Choice Movie Awards, and Independent Spirit Awards. 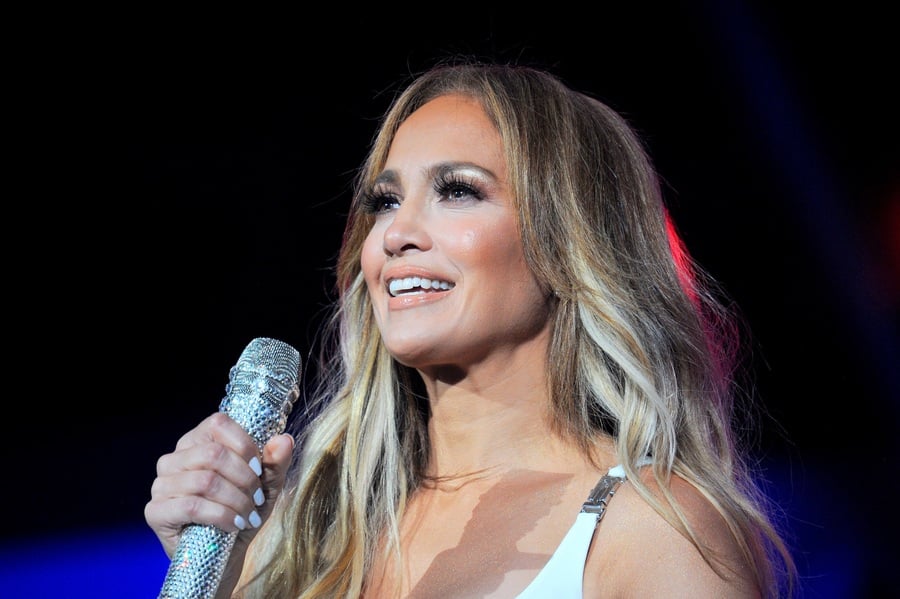 In 1999, Lopez kicked off her musical career with her debut album "On the 6". She has since recorded several studio albums, including a Spanish-language album. Both her songs and her albums have spent significant time on the Billboard charts. Lopez's third studio album, This Is Me… Then, was released on November 25, 2002. It was dedicated to actor Ben Affleck, her fiancé at the time. The album's lead single "Jenny from the Block", was later described by  MTV News as her most iconic song. From 1999 to 2014, Lopez released eight albums, On the 6, J.Lo, This Is Me…Then, Rebirth, Como Ama una Mujer, Brave, Love?, and A.K.A.

In May 2015, she announced her Las Vegas residency concert show, which premiered on January 20, 2016, the first of twenty initial dates. Titled All I Have, it took place at Planet Hollywood's Zappos Theater. Lopez signed a contract extending her Las Vegas residency for three years.  The residency was lucrative, and she performed 120 shows. The residency concluded on September 29, 2018, and grossed over $100 million in ticket sales during its three-year run.

On February 2, 2020, Jennifer Lopez performed the half time show for Super Bowl LIV in Miami, Fl when the San Francisco 49ers faced off against the Kansas City Chiefs.

Jennifer spent several seasons as a guest judge on American Idol. She joined the show for its 10th season and returned for the 11th season.

In 2003, she debuted her designer clothing line, JLO. In the same year, she released her first fragrance, Glow by J. Lo, which has spawned a number of spin-off fragrance products.

Lopez has had a number of high profile relationships. She's dated Sean Combs, Ben Affleck, and backup dancer Casper Smart. She's been married three times. Lopez married Ojani Noa in 1997. They divorced in 1998. Next she married a backup dancer named Cris Judd in 2001, only to divorce in 2003. She married singer Marc Anthony in 2004, and the couple has fraternal twins  (a son and a daughter) born in 2008. In 2011, Lopez announced that she was filing for divorce from Anthony. She has been dating retired baseball player Alex Rodriguez since 2017. They got engaged in March 2019.

In 2005, JLo was paid $15 million to star in Monster-In-Law. Jennifer made $12 million per year as a guest judge on American Idol.  She has also starred in a series of television ads for the Italian automaker Fiat. Between June 2017 and June 2018, Jennifer Lopez earned $50 million from her various endeavors. Between June 2018 and June 2019, she earned $43 million.

Jennifer Lopez owns a number of incredible properties from the Bronx to Bel Air. She has homes in Miami, Los Angeles, and New York City. Her primary West Coast residence is a sprawling seven-bedroom estate on 8-acres in Los Angeles' chic Bel Air neighborhood where she lives part of the year with Alex Rodriguez and their combined four children. She bought this home in 2016 from actress Sela Ward for $28 million.

In 2000, JLo bought her first luxury property in the hills above Los Angeles. The 11-bedroom home overlooks Beverly Hills and Los Angeles and cost Lopez $4.3 million. The main house is 15,000 square feet. Lopez put the home on the market in 2004 and sold it to nightclub owner Sam Nazaria for $12.5 million.

In 2002, Lopez bought a beachfront mansion in Miami for an undisclosed amount. The Spanish-style home is situated on just over 1.2 acres of land with manicured gardens and palm trees and has seven bedrooms and 13 bathrooms.

In 2019 they bought Jeremy Piven's Malibu mansion for $6.6 million. They proceeded to totally renovate the interior with the help of Joanna Gaines. A little under two years later, they sold this home for $6.8 million.