In touring years, Paul easily earns $50-70 million personally. Outside of touring years he earns tens of millions per year in royalties and licensing fees earned from both his own music and an incredibly valuable portfolio of publishing copyrights from other artists through his publishing company MPL Communications. MPL owns the copyright of songs from artists including Buddy Holly, Carl Perkins and many many others.

Early Life: Sir James Paul McCartney was born on June 18, 1942 and raised in Liverpool, England. McCartney's mother, Mary, died of a brain embolism when McCartney was 14. His father (James, or "Jim") was a trumpet player and pianist. The family had an upright piano and Paul was encouraged to practice often. McCartney composed an early tune that would later become "When I'm Sixty-Four" on the piano. McCartney wrote his first song "I Lost My Little Girl" on a Zenith acoustic guitar when he was 14 years old.

The Beatles: He met John Lennon and the Quarrymen at the age of fifteen and soon joined the band as a rhythm guitarist. The band was renamed The Beatles in 1960. The line up included McCartney, Lennon, George Harrison, and in 1962 they added Ringo Starr. By early 1964, the Beatles were sparking "Beatlemania" worldwide, dominating the U.S. and UK pop markets, and breaking multiple sales records. McCartney and Lennon co-wrote their early hits, including "Love Me Do" and several others. The Beatles are the best-selling music act of all time, with certified sales of over 183 million units in the U.S. and estimated sales of 600 million units worldwide. They hold records for most number-one albums on the UK Albums Chart, most number-one hits on the Billboard Hot 100 chart, and most singles sold in the UK. In 1988, The Beatles were inducted into the Rock and Roll Hall of Fame in 1988, and all four main members were inducted individually between 1994 and 2015. Between 1964 and 1970, the Beatles appeared in five major motion pictures.

Between 1960 and 1970, McCartney performed on twelve studio albums and wrote or co-wrote some of the most popular songs in pop music history, including "Yesterday", "Can't Buy Me Love", and "I Want to Hold Your Hand." In 1965, Queen Elizabeth II appointed McCartney and the other Beatles as Members of the Order of the British Empire. The band performed their last commercial concert at the end of their 1966 U.S. tour. The band's last recorded album was 1969's "Abbey Road." The Beatles then fell out over business disagreements. McCartney announced his departure from the group on April 10, 1970. A suit was filed for the band's formal dissolution on December 31, 1970.

Solo Career and Wings: After the break up of the Beatles in 1970, McCartney started a solo career with the release of "McCartney", which went on to be a number one album in the U.S. He was also one of the founding members of the band Wings from 1971 to 1981. His wife, Linda McCartney, played keyboard in the widely-successful band. Since 1989, he has toured consistently as a solo artist. He found more solo success than any of the other former Beatles. McCartney continues to be one of the world's most popular acts, with his concerts selling out almost instantly and drawing in millions of dollars.

He has released twenty-two studio pop albums and five classical albums since the breakup of the Beatles. 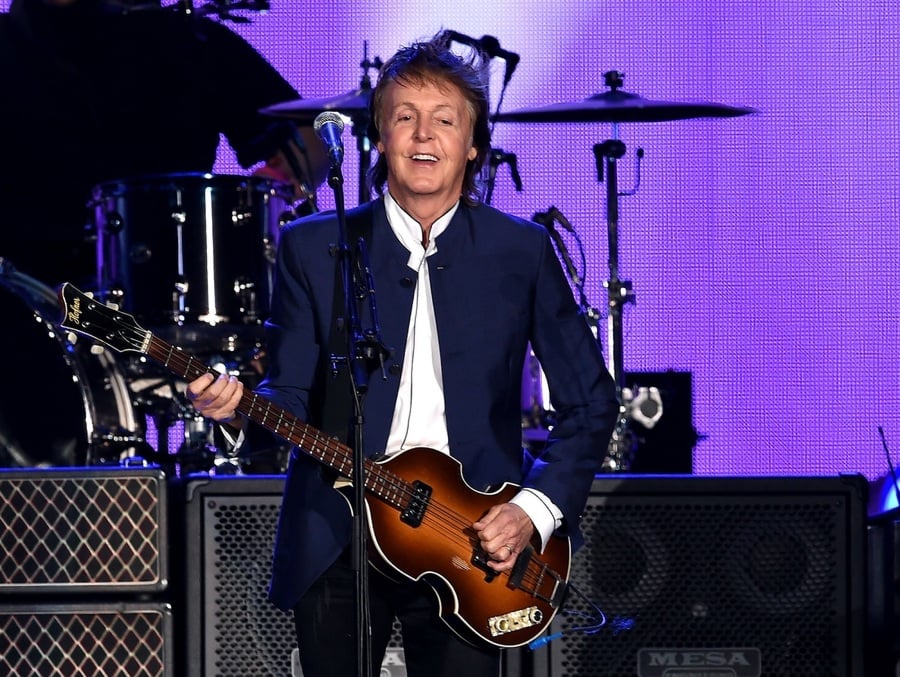 Musical Style: McCartney was primarily influenced by American rhythm and blues and Motown. He cites Little Richard as having been his idol in grade school. He was mostly a self-taught musician and mastered many instruments over the years including bass, acoustic, and electric guitars, as well as piano and drums. He's also famous for his range and the belting power in his vocals, and has developed and utilized a wide range of singing styles over his career.

Personal Life: McCartney married photographer and animal rights activist Linda Eastman (later Linda McCartney) in 1969; the couple had four children and remained married until her death in 1998. He married Heather Mills in 2002, and the two had a daughter, but they divorced in 2008. On October 9th, 2011, Paul McCartney married Nancy Shevell.

McCartney is known for his political and social activism, including work for animal rights and against landmines and genetically modified foods. He has been a vegetarian since 1975.

McCartney and the other Beatles were introduced to marijuana by Bob Dylan in 1964, and from then McCartney became a habitual and recreational user. He has made his pro-marijuana attitude public over the years. As a result of two minor drug convictions and fines for possession and growing marijuana plants, the U.S. government repeatedly denied him a visa until 1973. He was arrested a few more times throughout the '70s and '80s for possession of marijuana. In 1997, he announced his support of the decriminalization of the drug. He regularly used cocaine and LSD during the recording of "Sgt. Pepper's Lonely Heart's Club Band", but stopped shortly after recording was wrapped.

Relationship with John Lennon: It's widely known that McCartney had a strained relationship with Lennon during the time the two were bandmates and collaborating extensively on lyrics and music. They briefly reunited in the mid '70s, then drifted apart again. McCartney has stated that his last phone call to Lennon was friendly and left on good terms. On December 8, 1980, Lennon was murdered. McCartney was criticized by the media for having what was interpreted as a "superficial" response to reporters who asked for his reaction to the news while leaving an Oxford Street recording studio. He said he returned home that evening to watch the news on television and cry most of the evening for the loss of his friend and former collaborator.

Real Estate: Paul owns at least $100 million worth of real estate around the globe. Here's a breakdown of his real estate portfolio:

Total it all up and Paul owns at least $100 million, perhaps $150 million worth of real estate around the globe.