Linda Hogan net worth: Linda Hogan is a reality show star, public speaker and entrepreneur who has a net worth of $20 million dollars. Currently based in California, Linda Hogan is most widely recognized as the ex-wife of professional wrestler and actor, Hulk Hogan.

Early Life: Linda Marie Claridge was born on August 24, 1959 in Los Angeles, California. She was raised Catholic and she is of American, Australian, British, and Irish descent. In 1977, Hogan graduated from Chatsworth High School in California. The next year, she was a winning contestant on an episode of the '70s game show "Match Game."

Career: In 1995, Linda appeared on Hulk Hogan's album "Hulk Rules." She sang back up vocals with the Wrestling Boot Band. She first gained widespread popularity appearing on the VH1 reality show, "Hogan Knows Best", with Mr. Hogan and their two children in 2005. Linda was featured in a 2005 documentary on street racers called "Vehicular Lunatics." In 2011, she wrote a book titled "Wrestling the Hulk: My Life Against the Ropes." In the summer of 2011, Hogan appeared on Season 3 Episode 8 of the Spike reality television series "Bar Rescue."

She has appeared on numerous talk shows and daytime programs speaking about rebuilding her life after her high-profile divorce from Mr. Hogan. She splits her time between work in California and Florida, where she is launching skin care and clothing lines. She also owns a farm in California called, "Sunny Girl Avocados".

Personal Life: Linda Claridge met Terry Bollea, a.k.a. THE Hulk Hogan, in a restaurant in Los Angeles. The couple had a long-distance relationship, mostly over the telephone, for two years. They got married in 1983. Their wedding was attended by Vince McMahon, Andre the Giant, and numerous other celebrity wrestling personalities. They have two children together, Brooke Hogan, (b. 1988) who is also a reality television personality, and Nick Hogan, born in 1990. On November 20, 2007, Claridge filed for divorce from Hulk Hogan. Their divorce was finalized on July 28, 2009. 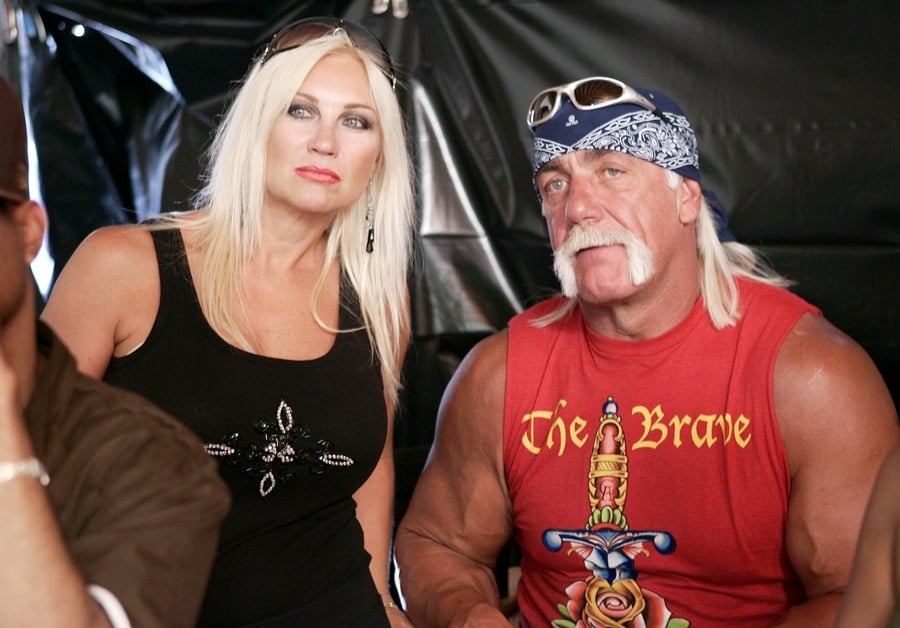 In 2008, Linda made headlines for her relationship with a much younger man, Charley Hill, who was 29 years her junior. They began dating when Claridge was 48 and Hill was 19. He proposed to her in 2010 on an episode of VH1 reality television show "Couple's Therapy." She broke up with Hill in 2012.  In October 2012, Linda was arrested in Malibu, California for a DUI while driving under the influence with an alcohol level of 0.084. She pleaded guilty and was released several hours later after posting a $5,000 dollar bail.

Hogan is involved with multiple charities and animal rights groups, and has campaigned against animal abuse in the circus with PETA, and also works with the Humane Society.

Divorce Settlement: It took over a year for Linda and Hulk to work out a final divorce settlement. In the end Hulk agreed to give Linda 70% of the couple's liquid assets plus real estate worth around $3 million. She was also granted the right to 40% of Hulk's future business revenue. Unfortunately for Linda, business revenue did not end up including the $115 million judgment Hulk won in his lawsuit against Gawker Media.

In a radio interview in 2011, Hulk admitted that the divorce brought him essentially to the brink of bankruptcy. Linda did not receive alimony, but she did receive $7.44 million of the $10.41 million they held in bank and investment accounts. She also got to keep a Mercedes-Benz, a Corvette and a Cadillac Escalade.

Real Estate: After separating from Hogan, Linda moved to Los Angeles where she rented a mansion in Holmby Hills for $18,000 per month. In 2010, not long after her divorce from Hulk Hogan was finalized, Linda paid $3.5 million for an incredible 23-acre estate in the Los Angeles suburb of Simi Valley. Located within a gated community, the palatial mansion on a hilltop had a private lake, resort-style infinity pool, lush landscaping, nature preserve and even room for a helicopter:

Known as Villa di Montagna, Linda listed the home for sale in 2015 for $5.5 million. This ultimately proved much more than the market could handle. Linda chopped the price several times before accepting $3.5 million June 2018.

About a decade into their marriage, Linda and Hulk paid $2 million for a waterfront property in Belleair, Florida. They demolished the existing structure and proceeded to spend several years and many millions building a 17,000 square-foot mansion. In 2006, as their separation loomed, Linda and Hulk listed the home for sale for an eye-popping $26 million. The financial/real estate bubble burst in 2008. At that point they had already separated and were eager to liquidate assets for splitting. They lowered the price in 2009 to $13.9 million. Hulk eventually bought Linda out of the property and continued to live there until he finally sold it for $6.2 million in 2012.