Courtney Stodden Net Worth: Courtney Stodden is an American reality television personality, singer, and actress who has a net worth of $500,000. Stodden is best known for marrying 51-year-old actor Doug Hutchison when she was just 16. Stodden and Hutchinson reportedly separated in 2017 but ultimately continued to live together. They officially divorced in 2020.

Early Life: Courtney Stodden was born Courtney Alexis Stodden on August 29, 1994, in Tacoma, Washington. She grew up in Ocean Shores, Washington, with mother Krista, father Alex, and older sisters Brittany and Ashley, and she began singing and writing music at a young age. Courtney has said that she was bullied at school from age 12 to 16 due to her mature looks, and her mother decided that homeschooling was a better option, so Stodden started taking online classes through a Christian academy.

Career: Courtney began working as a model during her youth, and in 2009, she hosted "The Courtney Stodden Show," which was produced by North Beach Community TV. She competed in the 2010 Miss Washington Teen USA pageant as Miss Ocean Shores Teen USA, and she released several singles, including "Car Candy," "We Are America," and "Don't Put It on Me," which was named one of The 11 Best Songs of '11 by "Star Observer." Stodden and her husband appeared on VH1's "Couples Therapy" in 2012, and the following year, she competed on the British version of the reality series "Celebrity Big Brother." In 2014, she appeared in 50 Cent's "Don't Worry Bout It" music video and the Reelz reality show "Hollywood Hillbillies."

In 2015, Vivid Entertainment released a sex tape entitled "Courtney Uncovered," and Stodden said that she was paid $1 million for it and would be donating the money to charity. That year she also signed a management and development deal with entertainment company Rich Kid Mafia. In 2016, Courtney appeared on Lifetime's "The Mother/Daughter Experiment: Celebrity Edition" with her mother and made her film debut in the comedy "Love Addict." In 2018, she released the EP "Off the Record" under the name Ember as well as the singles "Sixteen," "Me Too," "Pink Flamingo," and "For You." Stodden released six music videos between 2010 and 2018, and she starred on the FNL Network's "Courtney" in 2019. 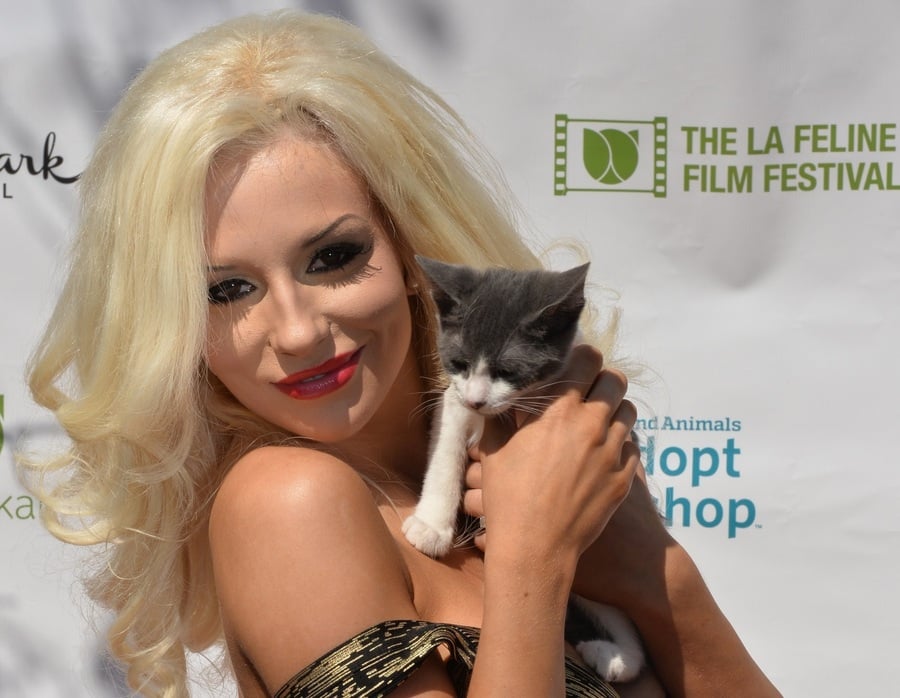 Personal Life: When she was 16, Courtney took an online acting workshop taught by Doug Hutchison, who had appeared in film and television projects like "The Green Mile," "Lost," and "24." Hutchinson wasn't aware of Stodden's age, and the two were in an online relationship for months before they met in person. After learning that Courtney was a minor, Doug said that he would end the relationship if her parents didn't approve, but Stodden's parents let her make her own decision. The couple married on May 20, 2011, in Las Vegas, and Hutchison received death threats, was dropped by his agent, and was disowned by his family. In November 2013, it was reported that Courtney and Doug were ending the marriage, but in August 2014, they revealed that they had reconciled and were planning on renewing their wedding vows.

The pair announced Courtney's pregnancy in May 2016, but she suffered a miscarriage a few months later. Stodden and Hutchinson renewed their vows that year in celebration of their fifth anniversary, but they had separated by January 2017, and Courtney filed for divorce in March 2018. The divorce was finalized two years later, and Stodden shared the news on Instagram, writing "I've been scared to even speak up about feeling groomed or being verbally abused during the almost 10 year marriage because I was a child and he was 50 when we married but I'm a woman now and it's time for me to put my big girl pants on and speak on this matter. I've felt completely trapped, manipulated and at times abandoned by adults // growing up in such an environment — it became a lonely and dark place."

Courtney began following a vegetarian diet in 2012 because of her empathy for animals, and she appeared in a Thanksgiving campaign for PETA later that year. She has said that though she's a Christian, she supports gay marriage and identifies as bisexual. In 2013, Stodden underwent breast augmentation surgery to increase her breast size to DD.