Cara Delevingne Net Worth and Salary: Cara Delevingne is an English fashion model and actress who has a net worth of $28 million. She is known for her many high-profile campaigns for various fashion designers and houses, including H&M, Zara, Chanel, and Burberry. Her notable films include "Paper Towns" (2015), "Suicide Squad" (2016), and Valerian and the City of a Thousand Planets" (2017). Thanks to endorsements with companies like YSL Beauty, Burberry, and Tag Heuer, she is one of the highest paid models in the world and earns an estimated $9 million a year.

Early Life and Career Beginnings: Cara Jocelyn Delevingne was born in Hammersmith, London, England, on August 12, 1992. Her parents are Pandora Anne (née Stevens) and Charles Hamar Delevingne, a property developer. She grew up in Belgravia, London, with her two older sisters Chloe and Poppy. She also has a paternal half-brother, Alex Jaffe. She attended Francis Holland School for Girls and Bedales School in Steep, Hampshire, before ultimately dropping out of school at the age of 17 to follow her sister Poppy and pursue a modelling career. In 2009, she signed on with Storm Management. However, her early modelling years were far from smooth sailing. She actually worked in the industry for a year before she was able to land a paying job, and she went through castings for two seasons before landing her first runway show.

Modelling Career: Delevingne's first big break came while she was working part-time in the office of a fashion website. Burberry's Christopher Bailey saw her, and cast her in the brand's spring/summer 2011 campaign. During the 2012 season, Delevingne walked in New York Fashion Week in a total of nine shows for fashion houses like Jason Wu, Rag & Bone, Thakoon, Donna Karan, Tory Burch, and Oscar de la Renta. She followed that up with London Fashion Week, where she walked exclusively for Burberry; Milan Fashion Week, where she walked in six shows for Fendi, Trussardi, Moschino, Blumarine, DSquared2, and Dolce & Gabbana; and lastly Paris Fashion Week, where she walked in seven shows for Nina Ricci, Sonia Rykiel, Cacharel, Stella McCartney, Paul & Joe, Kenzo, and Chanel. This is widely considered to be Delevingne's breakthrough season, and after walking in more than 20 shows over the course of the 2012 season's Fashion Month, she began to gain more and more media recognition. Vogue Magazine referred to her as their "crush of the season"; The Daily Telegraph declared her to be "THE girl of the season"; and Karl Lagerfeld sang her praises in an interview with Elle after the Paris Chanel show.

By the time the next Fashion Month started, in September 2012, Delevingne was the new darling of the fashion industry. Over the course of that month in New York, London, Milan, and Paris, she walked in over 50 shows. Her busiest time of the year is during the two international catwalk seasons. Beginning in 2015, Delevingne began to decrease her catwalk presence, becoming more selective and walking in fewer shows. Many speculated that this was due to an increase in her acting work, but she explained to Time magazine in an essay that rather, this downturn in the volume of her fashion show work was a conscious decision on her part to spend more time doing the "stuff I love" and embrace new, other opportunities. 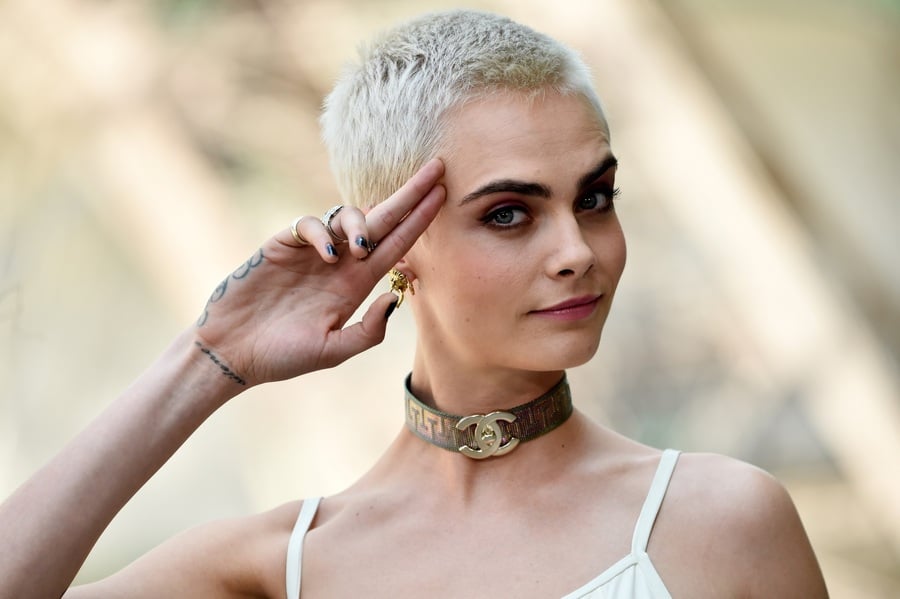 Acting Career: In 2012, Delevingne landed her first acting role, in the 2012 film adaptation of "Anna Karenina". She played the part of Princess Sorokina. She then made her television debut in June 2014 on the final episode of the series of self-contained TV plays, "Playhouse Presents". She has gone on to appear in several films, including the British psychological thriller "The Face of an Angel" with Daniel Bruhl and Kate Beckinsale; the Chanel short film "Reincarnation" with Pharrell Williams and Geraldine Chaplin; the film adaption of John Green's novel "Paper Towns" in 2015, as the lead character Margo Roth Spiegelman; the fantasy film "Pan" (2015); the DC comic-based action film "Suicide Squad" (2016); the British coming of age drama "Kids in Love" (2016); the film "Valerian and the City of a Thousand Planets" (2017) with Dane DeHaan and Rihanna; the period romance "Tulip Fever" (2017); and the mystery thriller "London Fields" (2018). She has also appeared in a number of music videos, including for artists like Die Antwoord, ASAP Ferg, and Taylor Swift, and starred in the Amazon Prime Video series "Carnival Row" (2019).

Other Projects and Work: Delevingne is a talented musician, and previously recorded two full albums of work under artist manager Simon Fuller. However, she turned down the offer of a record deal because under the deal, her name would be changed. She has recorded music with artists like Will Heard and Pharrell Williams, and she recorded the song "I Feel Everything" for her film "Valerian and the City of a Thousand Planets". Additionally, she has designed a capsule collection for the brand DKNY, and has designed four handbag collections for the brand Mulberry. She is also a published author, and co-wrote the book "Mirror, Mirror" (2017) with Rowan Coleman.

Personal Life: Delevingne has previously publicly identified as bisexual, but is now openly pansexual. She previously was in a relationship with musician St. Vincent from 2014 to 2016, and actress/model Ashley Benson from June 2019 to April 2020.