What was Erin Moran's net worth?

Erin Moran was an American actress who had a net worth of $50 thousand at the time of her death. She was best known for playing Joanie Cunningham on Happy Days and its spin off "Joanie Loves Chachi."

Erin Marie Moran was born in Burbank, California on October 18, 1960. She and her five siblings were raised by their parents Sharon and Edward Moran in Los Angeles. Her mother encouraged Erin to pursue acting as a child and she was signed with a talent agent when she was just five years old. There are also two other actors in the family, including Tony Moran who played Michael Myers in the movie "Halloween" in 1978. Her first acting role was in a TV commercial for First Federal Bank. As a child she was cast in the TV show Daktari from 1966 to 1969.

Her first major film role came in 1968's How Sweet It Is! Moran appeared on The Don Rickles Show, My Three Sons, Family Affair, and Gunsmoke, along with guest appearances on The Waltons and Bearcats.

Moran's big break came when she was 13 and was cast as Joanie Cunningham on the sitcom Happy Days in 1974. She played the feisty younger sibling of Ron Howard's character Richie. She continued playing the role until the show's hiatus in 1982. She starred in the short lived but classic spin-off Joanie Loves Chachi alongside Scott Baio in 1982-83 and then after it was cancelled, she returned to Happy Days for the final season. For her role in Happy Days she made between $650 to $900 per episode in the first three seasons. Moran was awarded the Young Artist Award for Best Young Actress in a New Television Series for her work on "Happy Days." Moran has revealed in interviews that the producers on Happy Days had pressured her to change from a precocious kid-like character to "suddenly they wanted me to lose weight and become this sexy thing."

She has also appeared in the TV shows Murder, She Wrote, The Love Boat, and Diagnosis: Murder. Moran also starred opposite Edward Albert in sci fi horror film "Galaxy of Terror." She was a contestant on the VH1 show Celebrity Fit Club in 2008. She has also appeared in the films Dickie Roberts: Former Child Star and Not Another B Movie in 2010. There were reports in 2013 that she would be reunited with "Happy Days" co-stars Scott Baio, Ron Howard, and Henry Winkler in the fourth season of the revamped Netflix version of "Arrested Development," however, this never came to fruition. Her final film role was in 2012 when she appeared as Mrs Sheppard on "The Deceit." Moran's last TV role was in "Celebrity Ghost Stories," in which she played herself. 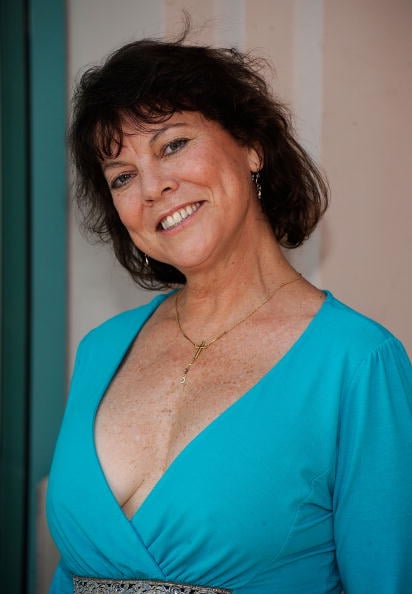 In April 2011, Moran and three of her Happy Days co-stars (Marion Ross, Anson Williams, and Don Most, as well as the estate of deceased Tom Bosley) sued CBS for $10 million in a breach of contract lawsuit, claiming they had not received payments for merchandising revenues owed to them. The suit claimed that they had not been paid revenues from show-related items like lunch boxes, games, T-shirts, toy cars, greeting cards, magnets, and other items using their likeness.

The lawsuit came about after Marion Ross discovered Happy Days slot machines at a casino using her likeness. A judge rejected the group's claim in October 2011 and in 2012 a judge denied a motion to dismiss. In July 2012, the actors settled the lawsuit and they each ended up receiving $65,000 and will continue to receive any merchandise revenue owed to them.

Moran married Rocky Ferguson in 1987 and they were divorced in 1993. She married Steven Fleischmann later that same year. After the television shows that put her on the map were canceled, she moved out of Los Angeles to the mountains in California. Moran has revealed in interviews that she suffered from depression during this time and was unable to get any acting roles. In 2010 her home in Palmdale, California was foreclosed on and she was evicted. She moved into her mother-in-law's trailer in Indiana.

She was found unresponsive by authorities on April 22, 2017 and was pronounced dead at the age of 56. An autopsy indicated the cause of death was complications of stage four cancer of the throat. In an open letter released by Scott Baio, Moran's husband Steven confirmed she had experienced symptoms of throat cancer in 2016 and her condition had deteriorated rapidly after unsuccessful attempts to treat her cancer.