Bridget Moynahan Net Worth and Salary: Bridget Moynahan is an American actress and model who has a net worth of $25 million. Moynahan is known for appearing on magazine covers and starring in films and television shows, such as "Sex and the City" (1999–2000), "Serendipity" (2001), and "I, Robot" (2004). Bridget played Helen Wick in 2014's "John Wick" and its 2017 sequel, and has starred as ADA Erin Reagan on the CBS series "Blue Bloods" since 2010. As of this writing, Bridget has appeared in more than 220 episodes of the series, and for the first several seasons she earned $60,000 per episode. She reportedly makes around $100,000 per episode now, which translates to around $3 million per season. In 2017, Moynahan and Wendy Howard Goldberg released "The Blue Bloods Cookbook: 120 Recipes That Will Bring Your Family to the Table."

Early Life: Bridget Moynahan was born Kathryn Bridget Moynahan on April 28, 1971, in Binghamton, New York. Her mother, Mary, was a school teacher, and her father, Bradley, was a scientist who formerly served as an administrator at the University of Massachusetts Amherst. Bridget grew up with brothers Sean and Andy in Binghamton and Longmeadow, Massachusetts, and she was the captain of the girls' basketball, soccer, and lacrosse teams at Longmeadow High School. Moynahan graduated in 1989 and attended the University of Massachusetts Amherst while pursuing a modeling career. She was signed by a modeling agency after accompanying a friend to an audition in Springfield, Massachusetts.

Career: Bridget began modeling for Springfield department store catalogs, and after moving to New York at age 18, she graced the covers of magazines such as "Elle," "Vogue," and "Glamour." She started doing commercials for shampoo and soap brands and took acting classes at the Caymichael Patten Studio. Moynahan made her acting debut in 1999, appearing in the independent film "Row Your Boat" and beginning a seven-episode stint as Natasha Naginsky on HBO's "Sex and the City." In 2000, Bridget appeared in four films: "Coyote Ugly" (which grossed $113.9 million at the box office), "Whipped," "In the Weeds," and "Trifling with Fate." She co-starred with John Cusack in 2001's "Serendipity" and with Morgan Freeman and Ben Affleck in the 2002 spy thriller "The Sum of All Fears." Moynahan played a CIA trainee in 2003's "The Recruit," then co-starred with Will Smith in 2004's "I, Robot," a massive hit with a worldwide gross of $347.2 million. 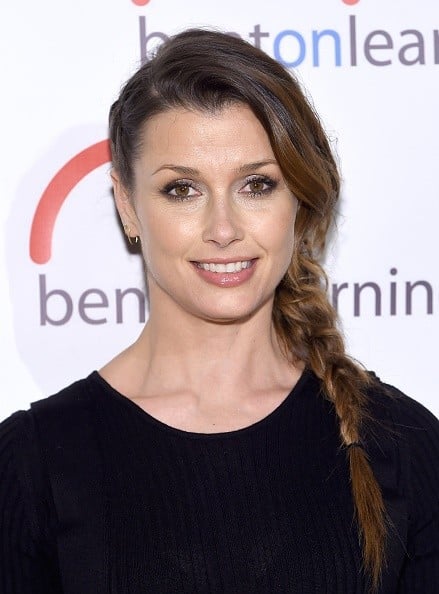 Personal Life: Bridget was in a relationship with screenwriter Scott Rosenberg in the early 2000s, and after they split in 2003, she began dating NFL quarterback Tom Brady in 2004. They ended their relationship in late 2006, and in February 2007, Bridget's representative revealed that Moynahan was pregnant with Brady's child. Their son, John Edward Thomas Moynahan, was born on August 22, 2007. In 2010, Bridget dated director McG, and she married businessman Andrew Frankel on October 17, 2015; Moynahan is stepmother to Frankel's three sons from a previous marriage.