What is Clarence Avant's Net Worth?

Clarence Avant is an American music executive and film producer who has a net worth of $50 million dollars. During a multi-decade career, Clarence helped launch the careers of dozens of musicians, including Janet Jackson. He was the subject of a 2019 Netflix documentary titled "The Black Godfather."

Clarence is widely called the "Godfather of Black Music" or "The Black Godfather" due to his many wide-ranging business and personal connections. He is considered either a mentor of friend to people from Barack Obama, to Diddy, to Jimmy Carter, to Bill Clinton, to Quincy Jones. Clarence has  long been a proponent of artists owning their master recordings and demanding to earn their true value.

Clarence Avant was born on February 25, 1931 in Climax, North Carolina. He was the oldest of eight children.

Avant moved to New Jersey when he was sixteen years old to escape an abusive step father. He moved in with an aunt and began working at Macy's.

Clarence's music career began in the 1950s when he became manager of Teddy P's Lounge in Newark, New Jersey. From there he went on to manage multiple performers, including Little Willie John, Sarah Vaughn, and Tommy Wilson.

One of his early music mentors was a man named Joe Glaser who managed Louis Armstrong from 1935 until his own death in 1969.

In 1967 Clarence relocated to California to work for Venture Records, Inc. which was founded by a former Motown songwriter/executive named Mickey Stevenson.

When Clarence first moved to LA, he lived in a mostly-black area called Baldwin Hills. When Mickey Stevenson visited Clarence in Los Angeles, he urged him to move to Beverly Hills to be more in the center of the entertainment world. Clarence could not afford a house in Beverly Hills at the time, so he reached out to his old mentor Joe Glaser to ask advice. Glaser ended up lending Clarence the money he needed for the home's down payment. When Glaser died in 1969, Clarence learned that the debt had been forgiven. He still lives in the house to this day. That house today is likely worth $10 million.

As a music executive, he became nationally recognized after he brokered the first venture between an African-American artist and a major record company. Unfortunately Venture Records shut down in 1969.

During this period Clarence was tapped by a colleague to help negotiate the sale of Stax records to Gulf & Western. The final deal value was $4.3 million. That's the same as around $40 million today. For his work, Clarence received a 10% fee. 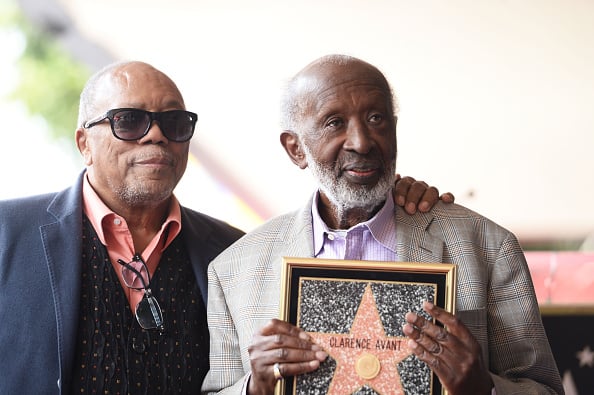 After Venture shut down, Clarence launched his own label, Sussex Records, Inc. Unfortunately label went out of business in 1975 after Clarence over-extended himself with the purchase of a radio station, among other ventures. The IRS seized and auctioned his assets to cover a $480,000 tax bill. That's the same as around $2.3 million today.

In the wake of Sussex's failure, Clarence launched a new label called Tabu Records which went on to have a number of smash hit artists such as The S.O.S. Band and producers Jimmy Jam and Terry Lewis, also known as Jam and Lewis. Jam and Lewis, via Tabu, worked with Janet Jackson and helped launch her career to the stratosphere.

He went on to work as an executive and consultant for multiple record labels and production companies, and is currently the President of multiple music publishing companies.

Clarence Avant married Jacqueline Alberta Gray in 1967. They have two children together. Their daughter Nicole is the former US Ambassador to the Bahamas and is currently married to Netflix honcho Ted Sarandos.

Tragically, Jackie Avant was shot and killed during a home invasion on December 1, 2021.