Johnnie Cochran net worth: Johnnie Cochran was an American retired lawyer who had a net worth of $8 million dollars at the time of his death. Though he served as the lawyer on multiple high-profile cases, he is most widely recognized for representing O.J. Simpson during his infamous double murder trial. Additionally, he represented celebrities including Michael Jackson, Tupac Shakur, Todd Bridges, Sean Combs, Snoop Dogg, and Riddick Bowe. Cochran was recognized for his advocacy of victims of police brutality. Johnny retired from the legal field in 2002. Johnnie died on March 29, 2005 a month after undergoing surgery for a brain tumor.

After passing the California bar exam in 1963, he began working as a Deputy City Attorney handling criminal cases. He launched his own firm, Cochran, Atkins, & Evans, in 1965 in Illinois. By the late 70s, he had become known as the "go-to" lawyer for cases involving police brutality and crime. He moved back to the West Coast to serve as Los Angeles' first black Assistant District Attorney. In 1983, he opened his own law firm in California, and his profile continued to grow. Over a decade when he was in his prime, Johnnie's firm won $40 million worth of damages for his clients and took home approximately $15 million in fees for himself and his firm. His firm now has 26 branches in multiple states.

Early Life and Career Beginnings: Johnnie Cochran was born in 1937 in Shreveport, Louisiana. His mother sold Avon beauty products, while his father was an insurance salesman. During the second wave of the Great Migration, the family moved to the West Coast, and settled in Los Angeles in 1949. Attending local schools, Cochran graduated from Los Angeles High School in 1955 as first in his class. He then enrolled at UCLA, where he earned a BA in business economics in 1959. Following this, he obtained a Juris Doctor degree from Loyola Marymount University in 1962.

Cochran had been majorly inspired by Thurgood Marshall and his victory in Brown v. Board of Education; as a consequence, he decided to devote his life to legal practice. In 1963, upon passing the California bar exam, he took a job as a deputy city attorney in Los Angeles' criminal division. One of Cochran's first celebrity cases came in 1964, when he prosecuted controversial comedian Lenny Bruce on charges of obscenity. He entered private practice two years later, and then opened his own LA firm, Cochran, Atkins & Evans.

First Major Cases and District Attorney: Cochran had a turning point when he took his first significant civil case, representing an African-American widow who sued the police officers who had killed her husband. Although the case resulted in defeat for Cochran, it also made him more aware of the injustices faced by the black community. Seeing the prevalence and awful impact of police abuse, he realized the power he had in bringing positive attention to the issue. In the early 70s, he defended 17-year-old street gang member Stanley Tookie Williams in a robbery trial. Within ten minutes of the trial, Williams was acquitted of all the charges. By the late 70s, Cochran had established a prominent reputation within the black community, and continued to litigate many high-profile cases of police brutality.

Cochran returned to the Los Angeles County District Attorney's office in 1978, taking the leadership position of First Assistant District Attorney. During this time, he fortified his connection to the political community, worked to improve his image, and sought to reform the system from within.

Private Practices: In the early 80s, Cochran came back to private practice, opening the Johnnie L Cochran Jr. law firm. Among his successes, Cochran won $760,000 for the family of Ron Settles, a black college football player his family alleged was killed by police. For most of his cases, Cochran represented plaintiffs in actions involving civil misdeeds. He became known for his theatrical and eloquent courtroom presence, which many claimed was powerful enough to encourage settlements. On top of successfully advocating for minorities in cases of police brutality and other civil crimes, Cochran earned a reputation as a go-to lawyer for the wealthy. In 1990, he joined the firm Cochran, Mitchell & Jenna, and seven years later, joined Cochran, Cherry, Givens & Smith.

O.J. Simpson Murder Case: In 1995, Cochran defended O. J. Simpson for the murder of his ex-wife and her friend. In his closing arguments, he said the famous line "If it doesn't fit, you must acquit." Although pundits criticized his performance in the criminal trial, Cochran was able to persuade the jury that the prosecution failed at proving Simpson guilty beyond a reasonable doubt. He also managed to convince them that the police had been involved in planting evidence against his client.

Following the trial, Cochran appeared as a regular commentator on legal-related television shows, and hosted his own show, CourtTV's "Johnny Cochran Tonight." 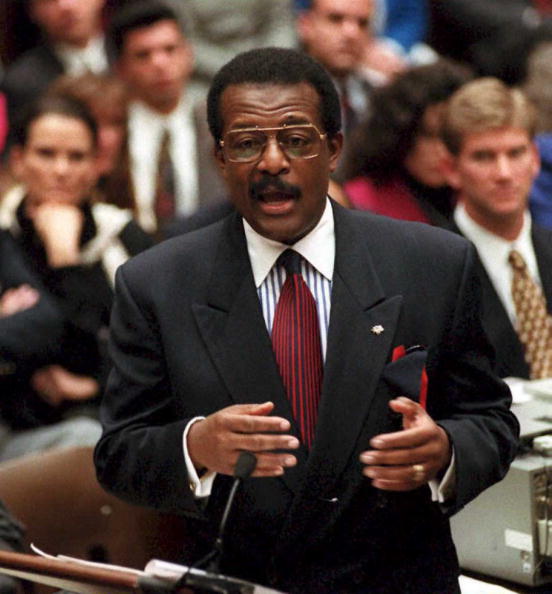 Other Cases: Among his other high-profile cases, Cochran successfully represented Abner Louima, a Haitian immigrant in Brooklyn who had been raped while in police custody. Louima was awarded a settlement of $8.75 million, the biggest police brutality settlement given in New York City.

Cochran also represented Michael Jackson, who had been accused of child molestation; the case was ultimately settled out of court. In 2001, Cochran defended Sean Combs against charges of bribery and stolen weapons; he ended up winning the case. In 2002, Cochran let Combs know that this would be his final criminal case, and retired soon after.

Personal Life and Legacy: Cochran wed Barbara Berry Cochran in 1960; the pair divorced in 1977. Later, in 1985, he married Sylvia Dale, whom he later divorced in 2005. Over this time, thanks to his legal successes, Cochran owned homes in Los Angeles, apartments in West Hollywood, and a condo in Manhattan. He has three children.

Cochran was diagnosed with a brain tumor in 2003, and underwent surgery in 2004. In March of 2005, he passed away at his residence in Los Angeles. After a memorial service at the West Los Angeles Church of God in Christ, he was buried at the Inglewood Park Cemetery.

In 2006, officials of the Los Angeles Unified School District approved of the renaming of Mount Vernon Middle School to Johnnie L Cochran Jr. Middle School. Cochran had attended the school as a youth. The next year, the stretch of street in front of the school was renamed to Johnnie Cochran Vista. Meanwhile, in his hometown of Shreveport, Louisiana, Cochran's footprints are featured on the Northwest Louisiana Walk of Stars.