What is Miuccia Prada's Net Worth?

Miuccia Prada is an Italian fashion designer and entrepreneur and has a net worth of $5 billion. Miuccia Prada earned her net worth by taking over the family-owned luxury goods manufacturer in 1978, which was owned by the Prada brothers. She began making waterproof backpacks out of Pocone. She is known for her understated, minimalist, classic, cool, and comfortable luxury. She designs clothes that take account of a woman's curves and at the same time communicate intelligence as well as a sense of fun.

Miuccia Prada was born Miuccia Prada Bianchi on May 10th, 1949 in Milan, Italy to Luigi Bianchi and Luisa Prada. She was adopted by her aunt and dropped the name Bianchi.  She went to Liceo Classico Berchet high school in Milan and has a Ph.D. in Political Science from the University of Milan.

Oddly enough, Prada actually set out to be a professional mime, training at the Teatro Piccolo's mime school and performing for five years. Prada was involved in the women's rights movement during the '70s in Milan and was a member of the Italian Communist Party.

The company, Prada, which produces luxury bags, was established by her grandfather in 1913. Originally in the role of overseeing the design of the accessories, Prada and her husband, Patrizio Bertelli, took over the family-owned luxury goods manufacturer in 1978. Since then, they've turned it into a fashion powerhouse, acquiring Jil Sander, Helmut Lang and shoemaker Church & Co. Prada has 250 fully owned shops around the world. She is entirely in charge of the company's creative decisions, and says she bases her decisions mostly on intuition. She is reported to be overly fussy about each detail of her design. 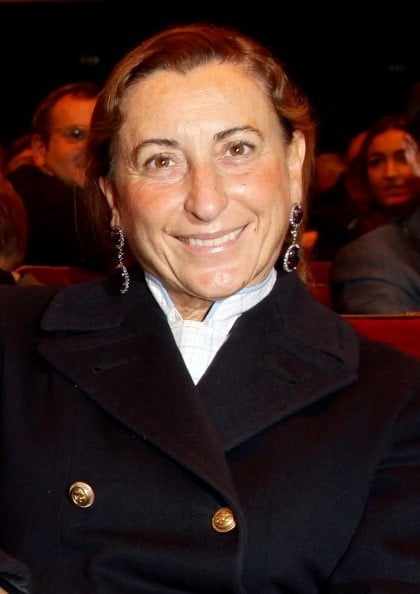 In 1985, she had her first hit when she designed a line of black, finely woven nylon handbags that instantly became a hit. She designed and introduced her first women's ready-to-wear collection that was critically acclaimed in 1989, and then in 1995 she introduced men's wear, and then launched the Miu Miu line. Miu Miu was introduced in 1992 as a less expensive women's wear line that was inspired by Miuccia's personal wardrobe and her own personal nickname. In 1993 she was honored with the prestigious Council of Fashion Designers of American International Award. Prada had an opportunity in 1994 to showcase her collections and designs for both the London and New York fashion weeks, and had a long-standing showing at Milan's fashion week.

Prada is the CEO of Prada along with her husband as of 2021. Her husband, Patrizio Bertelli, is still the predominant business force in the company who is responsible for the commercial side of products and Prada's retail strategy. The company has since expanded into shoes, fragrances, leather goods, and more. Miuccia stepped down as the brand's sole creative director in 2020. Due to the COVID-19 pandemic, her final collection was presented in a sequence of several short films. Artist collaborations on the films included Martine Syms and Juergen Teller, along with Raf Simons.

She met her husband and business partner Patrizio Bertelli at the same time she took the helm of the family company. They have two sons, and their eldest son is rally driver Lorenzo Bertelli. The two live in the apartment where Miuccia was born. Prada and Bertelli were put under investigation by Milan prosecutors in 2014 as part of a tax evasion probe. They both paid more than 400 million euros in 2016 to settle their tax bill, which is roughly $429 million USD.

Prada is an avid collector of contemporary art. She owns several artworks by Young British Artists and is close friends with many world-renowned artists.