What is John Gotti Jr.'s Net worth?

John Gotti, Jr. is a former New York mobster who has a net worth of $10 million dollars. John Gotti, Jr is believed to have been the acting boss of the Gambino crime family from 1992 to 1999, after his father John Gotti was sent to prison.

After Junior's father was brought down by the FBI and incarcerated, Junior took a more cautious and secretive approach to conducting his father's business, to include "walk-talks", or conversations held while walking alongside trusted capos (higher-ranking members of a crime family). According to federal prosecutors, Junior was inducted into the Gambino crime family in 1988 and was named a caporegime (captain) in 1990—making him, reportedly, the youngest capo in the Gambino family's history. Though Junior was a defendant in four racketeering trials, the trials all ended in mistrials, earning Junior yet another nickname, Teflon Jr., as no conviction would 'stick'. Junior claims to no longer be associated with organized crime.

Gotti was born on February 14, 1964 in the Queens borough of New York City to parents John Gotti and Victoria DiGiorgio Gotti, both of whom were of Italian descent. Gotti had four siblings and was primarily raised in Howard Beach, New York. Throughout his childhood, he was exposed to the mob culture of New York City considering his father's deep involvement with the Gambino crime family.

He attended the New York Military Academy and then started a trucking business with the help of his father called Samson Trucking Company. He then worked in the Carpenters Union after the trucking business failed.

Involvement with the Gambino Crime Family

While Gotti had made an attempt to avoid working with his father in the mob, he was ultimately inducted into the Gambino crime family in 1988 when he was 24 years old. He was named a capo, or captain, in 1990, giving him a leadership position at a very young age.

By 1992, his father was sentenced to life in prison on racketeering charges. While in prison, his father was determined to maintain his position as head boss until he either died or retired. In order to do so, he relayed his orders to Gotti and his brother Peter, who was also involved in the crime family.

Gotti became more secretive in how he went about doing business in order to avoid being detected by FBI bugs, which had been the downfall of his father. He also tried to play the part of a legitimate businessman in order to decrease suspicion. However, many of the other mob families in New York, as well as some of his own men, did not think very highly of his strategies. He did not develop the reputation for negotiation that his father had and some of the other prominent families, like the Genovese family, refused to work with him at all. By 1995, a conspiracy to murder Gotti was uncovered, signifying his lack of popularity in the city.

In 1997, the FBI searched the basement of a property owned by Gotti and found a number of incriminating items, including a list of the members of his organization, guns, and a large amount of cash. Additionally, lists of the members of other crime families in New York were found, a discovery that was particularly damning for Gotti as while it was typical for bosses to keep lists of prospective members of other crime families, they were supposed to be destroyed after their inductions took place. This discovery destroyed Gotti's reputation in New York, as it put other families at risk of heightened government scrutiny, and it also enraged his father. After his incident, he earned the nickname "Dumbfella" in the New York City media. 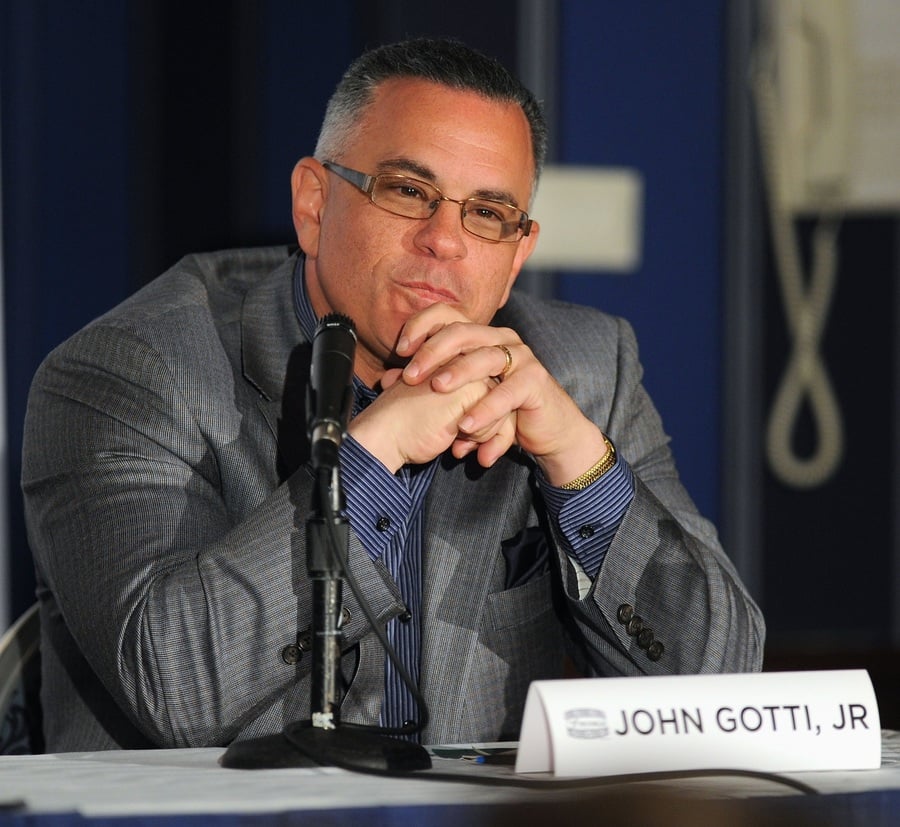 The following year, in 1998, Gotti was indicted on racketeering charges under RICO. By that time, he was believed to be the acting boss of the family. The charges related to the extortion of money from the owners of an upscale strip club in Manhattan called Scores. Faced with overwhelming evidence, Gotten pleaded guilty against the advice of his father and was sentenced to six and a half years in prison in 1999 and a fine of $1 million.

In 2004, just before he was to be released from prison, he was charged with 11 counts of racketeering as well as an alleged plot to kidnap Curtis Silwa, the founder of the Guardian Angels, a crime prevention non-profit. After a number of trials, the federal prosecutors decided not to continue pursuing Gotti and the charges against him were dropped. Gotti had claimed he had left his life of crime behind him after being convicted in 1999.

However, Gotti was again arrested in 2008 and charged with conspiracy to commit murder and racketeering. Many of the alleged crimes had taken place in the late 1980s and into the 1990s. Gotti pleaded not guilty and the jurors failed to reach an unanimous verdict. The government again decided not to pursue further charges against Gotti in 2010. He maintains that he has left the Gambino crime family. In 2015, he gave an interview in which he denied that he ever worked as an informant with the FBI. He claimed that while he did supply the FBI with some information, the information was false and did not result in any negative action against the family.

In 1990, Gotti married Kimberly Albanese. They have had six children together and live in Oyster Bay Cove in Long Island, New York. His son, John Gotti III has become a professional MMA fighter. Gotti wrote a book that was published in 2015 detailing some of the events of his life called "Shadow of My Father."

He has also depicted in some popular media. In June of 2018, the film "Gotti" was released. It covered the events of Gotti's life with a particular focus on his relationship with his father. At the same time, the television documentary miniseries called "Gotti: Godfather and Son" was released.