What Is Mike Lindell's Net Worth?

Mike Lindell is an American entrepreneur, business executive, and author who has a net worth of $50 million. Lindell is most famous for being the founder and creator of My Pillow. He is also known for being a vocal supporter of Donald Trump, and he has been involved in Trump's attempts to overturn the 2020 presidential election, providing financial support and spreading conspiracy theories.

In 2012, Mike founded the non-profit organization the Lindell Foundation, which helped drug addicts obtain treatment, and in 2019, he launched the Lindell Recovery Network to "help struggling addicts find hope, restoration, and the love of Jesus."

Mike published the book " What Are the Odds? From Crack Addict to CEO" in 2019, and in 2021, he directed, produced, and starred in the documentary "Absolute Proof" to try to prove that Trump won the 2020 election. Fact-checkers have criticized the documentary for including "debunked, unsubstantial claims," and it was removed from YouTube and Vimeo a few hours after it livestreamed on the One America News Network website.

Mike Lindell was born Michael James Lindell on June 28, 1961, in Mankato, Minnesota. He grew up in Carver and Chaska, Minnesota, and he began gambling as a teenager. After graduating from high school, Mike enrolled at the University of Minnesota, but he dropped out a few months later.

Lindell became addicted to cocaine in his twenties, and in the '90s, he began using crack. His drug abuse and gambling debts led to his first wife ending their marriage as well as the foreclosure of his home. Mike's drug addiction became so severe that his crack dealers held an intervention in 2008. According to Lindell, "They were three of the biggest dealers in the cities. They said I had been awake for 19 days straight. They refused to sell to me again. One of them tried babysitting me until I fell asleep." Mike has said that prayer helped him get sober in 2009.

In the '80s, Mike launched several small businesses in Minnesota, such as bars, restaurants, and a carpet cleaning business. In 2004, he invented the My Pillow pillow, and for the next few years, he sold the product at trade shows, mall kiosks, and state fairs. He established My Pillow, Inc. in 2009, and the company took off after its first infomercial in 2011. The 30-minute show cost $500,000 to produce, and it aired an average of 200 times per day. Lindell has said of the infomercial, "It became the number one infomercial in the world. In 40 days, we went from five employees to 500."

At its peak, the company generated a reported $280 million in revenue per year, and as of this writing, the company has sold over 50 million pillows and employs more than 1,600 people.

In 2017, My Pillow, Inc.'s accreditation was revoked by the Better Business Bureau due to customer complaints, and its rating was lowered to an F.

Mike appointed his son Darren the company's CEO in 2020, and as of 2021, many retailers no longer carry My Pillow products. Lindell believes that retailers stopped selling his products because of his claims of voter fraud in the 2020 election, but a Bed Bath & Beyond spokesperson said that My Pillow was one of many "underperforming items and brands" the retailer decided to discontinue. In March 2021, it was announced that Mike was launching a social media platform called Vocl that would be a cross between Twitter and YouTube. He later changed the name to Frank because of a dispute with a company that had established a website called Vocal. Lindell spent four years developing Frank, which launched in April 2021 with numerous technical difficulties. 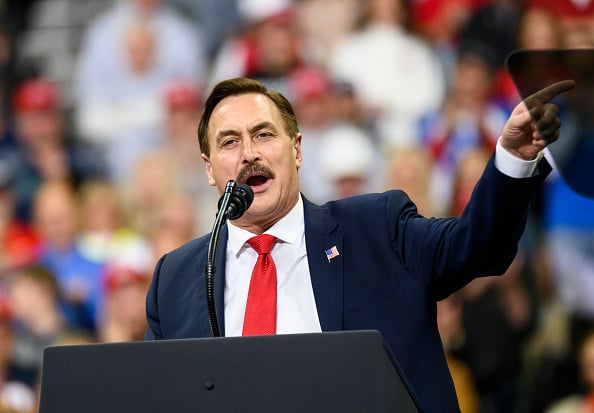 Mike married Karen Dickey on May 9, 1987, and they have four children, Lizzy, Heather, Darren, and Charlie. Lindell and Dickey divorced after two decades of marriage, and Mike wed Dallas Yocum on June 8, 2013. Lindell filed for divorce the following month after Yocum left him.

In early 2021, the "Daily Mail" claimed that Mike began a nine-month relationship with actress Jane Krakowski in late 2019. Krakowski's rep denied the allegation, stating, "Jane has never met Mr. Lindell. She is not and has never been in any relationship with him, romantic or otherwise." Lindell also denied it and filed a lawsuit against the publication. During a March 2021 appearance on "The Domenick Nati Show," Mike revealed that he had been living in undisclosed locations due to safety concerns. He stated, "I haven't been back to Minnesota, and anybody out there that is looking for me, I haven't been back there in two months. I can't go back there."

Lindell became a Trump supporter after meeting with the then-presidential candidate in August 2016. Mike later said, "When I met with Donald Trump, it felt like a divine appointment, and when I walked out of that office I decided I was going to go all in." Lindell attended the final presidential debate as well as Trump's inauguration, and he has spoken at Trump rallies and the 2019 Conservative Political Action Conference.

In 2019, he met with Trump about the issue of opioid addiction, and he was in attendance when the then-president signed the SUPPORT for Patients and Communities Act, which dealt with opioid use disorder. During the beginning of the COVID-19 pandemic, Mike temporarily changed the focus of the My Pillow factories from bedding products to face masks at the Trump administration's request. Around that time, Lindell appeared at a White House COVID-19 press conference, and he became the Minnesota campaign chair for Trump's 2020 re-election campaign. During the pandemic, Mike has promoted oleandrin, a toxic plant extract, as a COVID-19 cure, and he is a board member of Phoenix Biotechnology, a company that manufacturers products that contain oleandrin.

After Joe Biden defeated Trump in the 2020 election, Lindell was involved in sponsoring a bus to go on a two-week tour to challenge the results of the election, and he spoke at a few stops on the tour. He also attended the rally that preceded the January 6th attack on the Capital, but he has said that he was not present at the insurrection. However, he did spread conspiracy theories that Antifa was behind the attack and were probably "dressed as Trump people."

Mike has also promoted conspiracy theories that the Smartmatic and Dominion voting machine companies teamed up with foreign powers to rig their machines and steal the election, which resulted in Dominion filing a $1.3 billion lawsuit against him. In January 2021, these false claims got Lindell permanently banned from Twitter. In August 2021, Mike held a three-day "Cyber Symposium" to present "irrefutable evidence" of voter fraud, which he never produced.

In September 2021, Bonner County, Idaho, began a recount of ballots that were cast in the 2020 election after Lindell alleged that more than 40 Idaho counties had been hacked. The recount concluded that accuracy was within 0.1% with no evidence of hacking, and Idaho's Chief Deputy Secretary of State, Chad Houck, announced that the state would be billing Mike for the cost of the recount.