What is Serena Williams' net worth, salary and career earnings?

Serena Williams is a world champion professional tennis player who has a net worth of $250 million dollars. She is considered by many to be one of the best female tennis players of all time. She is the highest-earning female player by a mile.

In a typical recent year Serena has earned $30 – $40 million from on-court earnings and endorsements. For example, between June 2019 and June 2020 Serena earned $35 million, of which roughly $20 million came from endorsements.

Serena Jameka Williams was born on September 26, 1981 in Saginaw, Michigan but spent some of her childhood in Compton, California. She and her sister, Venus Williams, were steered towards tennis at a very early age. Both girls were homeschooled to maximize the amount of time available for practice. Her father, Richard Williams and mother Oracene Price served as her official coaches. Other mentors helped her learn the game young, including Richard Williams who would go on to found The Venus and Serena Williams Tennis/Tutorial Academy. When Serena was nine, she and her family moved to West Palm Beach, Florida so she could attend Rick Macci's tennis academy. In 1995, their father pulled the daughters out of Macci's academy and took over again as their official coach.

Serena Williams has been ranked number one in the world eight times and has earned more prize money than any other female tennis player in history. As of this writing, Williams has earned more than $90 million in career prize money. She has won 23 singles Grand Slam titles and fourteen doubles titles with her sister Venus Williams. She also won gold medals at the Sydney, Beijing and London Olympics.

Williams played in her first professional tournament in 1995 at the age of 14. At the 1997 Ameritech Cup, a  No. 304 ranked Williams made quite a splash by upsetting the No. 7 and No. 4 ranked players before ultimately being beaten in the semifinals. The wins propelled her career and she ended 1997 with the rank of No. 99.

The following year saw a number of high-profile wins, including some doubles titles at Grand Slam events like Wimbledon and the US Open. However, her first singles title continued to elude her. In 1999, Williams began to show her early dominance, defeating a string of top players and winning her first Grand Slam singles tournament, the US Open.

Serena Williams continued to assert her dominance in the first few years of the 2000s, finally reaching the No. 1 ranking in 2002. That year she also won three Grand Slam titles: the French Open, Wimbledon, and the US Open, beating none other than her sister, Venus, in the final of each tournament. In 2003, she claimed her fourth Grand Slam title, the Australian Open. This made her the holder of the title for all four major Grand Slam tournaments at the same time, which she referred to as the "Serena Slam." She would again accomplish this feat over the 2014-15 Grand Slam season.

The next few years saw her struggle with both health and personal issues including knee surgery and the death of her half-sister, Yetunde. While she continued to win tournaments, her ranking fell out of the top 10, leaning many in the tennis community to suggest that both she and her sister, Venus, were no longer the powerful forces that they once were. However, by 2008, Williams had clawed her way back up to the top ranking and winning a string of Grand Slam tournaments.

The year 2011 saw the return of health problems. That year, doctors found a blood clot in one of her lungs. She underwent procedures to remedy this, leading many to wonder if she would ever return to the sport. However, the following year saw her again take major titles, as well as her first-ever women's single gold medal at the 2012 Olympic Games. She continued to claim victory in wins at the US Open in 2012, the French, Australian, and US Opens in 2013 as well as Wimbledon that same year, Wimbledon in 2014 and 2015, and wins at the Australian Open and Wimbledon in 2016. 2018 proved to be difficult years for Serena, with losses at two consecutive US Opens and Wimbledons.

Even while battling injuries and taking time off to become a parent, Serena Williams has continued to be a dominant force in women's tennis. She holds a number of records, including her 23 Grand Slam singles titles.

Williams is one of the most popular endorsement athletes in the world. She earns $15-20 million per year outside of tennis endorsing companies like Nike and Kraft Foods. In 2004, Williams inked a $40 million deal to produce a fashion line with Nike. 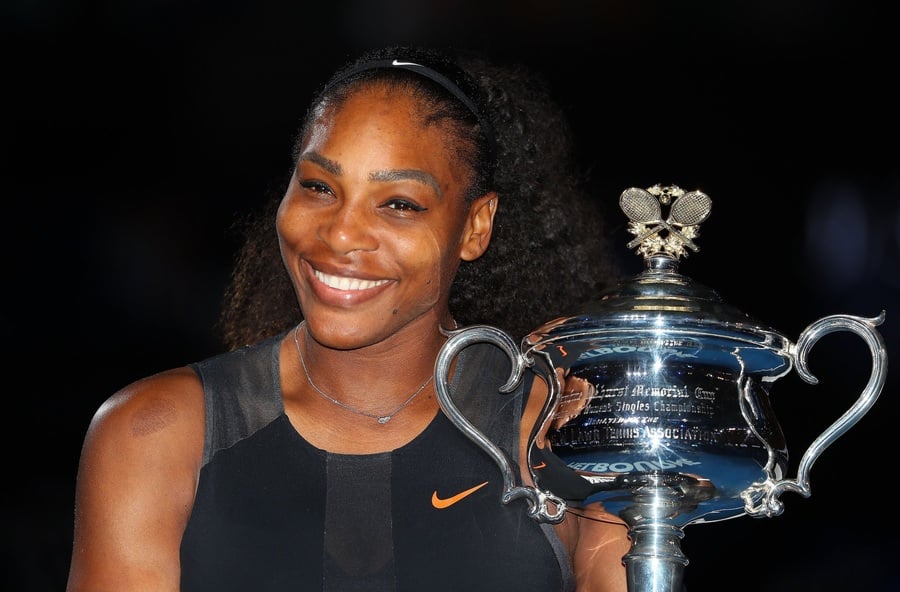 Williams uses her social media as a medium to support different causes, particularly in support of Black Lives Matter and the LGBT community. She's also passionate about gender equality both on and off the court and is vocal about her struggles as a woman in the tennis world. She has received many awards for her activism and was even honored with the NAACP President's Award.

Serena and Venus are known to visit hospitals and play tennis matches to raise money for Ronald McDonald House charities. They had an entire ESPN special dedicated to their charity tour in 2004 and 2005. Serena founded the Serena Williams Foundation, which provides scholarships to universities for underprivileged students.  The foundation also helped fund the construction of the Serene Williams Secondary School in Matooni, Kenya. In addition, the foundation joined Helping Hands Jamaica to build the Salt Marsh Primary School for children in Jamaica in Trelawny Parish.

Serena has worked closely with the Big Brothers Big Sisters of Greater L.A and has been an international Goodwill Ambassador for UNICEF since 2011. Serena and Venus collaborate on the Williams Sisters Fund and work on charity projects together. They teamed up to found the Yetunde Price Resource Center in Compton in honor of their late sister. The center provides aid and services to families affected by community violence. In 2017, Williams became an Ambassador for the Allstate Foundation's Purple Purse project. She also supports the Elton John AIDS Foundation, the NHS's Great Ormond Street children's hospital in London, the HollyRod Foundation, the Eva Longoria Foundation, and several others.

Off the court, Williams has dabbled in some television and voice work. She voiced a 2001 episode of The Simpsons and in 2005 provided voicework for Playhouse Disney's Higglytown Heroes. She has guest-starred in episodes of The Bernie Mac Show, ER, and Law & Order. In 2007, Serena made an appearance in the music video of I Want You by Common, alongside Alicia Keys and Kanye West. The Williams sisters wrote a book together in 2005, Venus & Serena: Serving From the Hip: Ten Rules for Living, Loving, and Winning.

Serena is the founder of the self-funded clothing line S by Serena. She owns minority stakes in the UFC and the Miami Dolphins.

Williams married Alexis Ohanian, the co-founder of Reddit, in November 2017 in New Orleans. Their wedding guests included big names such as Beyonce and Kim Kardashian West, among others. In April 2017, Williams accidentally revealed her pregnancy in a Snapchat photo that she meant to keep for her own records. She gave birth to a daughter in 2017 via C-section due to a pulmonary embolism during labor. She was bedridden for six weeks after birth due to a second pulmonary embolism and had to delay her training. She announced in August 2018 that she was a sufferer of postpartum depression.