Niki Lauda Net Worth: Niki Lauda was an Austrian former racing Formula One champion who had a net worth of $200 million at the time of his death in 2019. Though he showed immense promise at a young age, he was not able to truly shine in Formula One until 1974. Lada achieved a first-place finish in his debut race and would go on to dominate for the next few seasons. In 1976, he suffered a near-fatal crash that left him permanently disfigured, and he returned to racing six weeks after the crash, continuing to race throughout the rest of the season. Niki's injuries made it difficult for him to complete races, but despite his injuries, he finished the season in second place. He finished the next year in first place, but his relationship with Ferrari, his sponsoring team, had soured, and he changed teams.

Lauda retired in 1979, then returned to racing in 1982. He raced with moderate success, even winning a third world championship in 1984 by half a point, then officially retired in 1985 to run his two airlines, Lauda Air and Niki. During his racing career, Niki entered 171 races and ended up with 25 wins and 3 championships. He also wrote five books, including "My Years with Ferrari" (1978) and "To Hell and Back: An Autobiography" (1986), and he was portrayed by Daniel Brühl in the 2013 film "Rush" (he also had a cameo in the film). When Lauda was hired in 2012 to be a non-executive director of the Mercedes Formula One team, he was awarded a 10% ownership stake in the team.

Salary Highlights: When Lauda signed with Brabham-Alfa Romeo in 1978, it came with a $1 million annual salary. That's the same as around $4 million today after adjusting for inflation. After a brief retirement, he made a comeback in 1982 with McLaren. His McLaren deal paid $3 million per year, the same as $12 million per year today.

Early Life: Niki Lauda was born Andreas Nikolaus Lauda on February 22, 1949, in Vienna, Austria. He was born into a successful paper manufacturing family, and his paternal grandfather, industrialist Hans Lauda, co-founded the Federation of Austrian Industries in the 1940s. Niki's family didn't approve of him pursuing a career in auto racing, and their disapproval led to Lauda eventually cutting off contact with them. He began racing in the late 1960s, first driving a Mini, then switching to Formula Vee before moving on to private Chevrons and Porsches.

Career: In 1971, Lauda took out a bank loan to buy his way into the Formula Two circuit and was soon promoted to the Formula One team. In 1973, he borrowed money from the bank again to buy his way onto the British Racing Motors (BRM) team. When Niki competed in that year's Monaco Grand Prix, he caught the attention of Enzo Ferrari, who signed him to the Ferrari team in 1974. Lauda finished in second place in his first race for Ferrari, the Argentine Grand Prix, and he also won the Spanish Grand Prix that year. In 1975, he won four races in the new Ferrari 312T, then came in third place at the Italian Grand Prix and won the United States Grand Prix. In the first six races of the 1976 seasons, Niki won four and came in second in two. He was declared the winner of the British Grand Prix two months after the race, due to the Ferrari team appealing James Hunt's victory and Hunt subsequently being disqualified. During the 1976 German Grand Prix, Lauda's car swerved off the racetrack and burst into flames after hitting an embankment. Trapped in the wreckage, Niki's head was severely burned, and his lungs and blood were damaged from Lauda inhaling hot toxic gases before he was freed by fellow driver Arturo Merzario. Niki was conscious just after the accident, but he lapsed into a coma after being transported to the hospital. Miraculously, Lauda survived his injuries, and after his recovery, he began wearing a red cap to hide the extensive scarring on his head. He returned to racing just six weeks after the horrific crash and came in fourth place at the Italian Grand Prix. 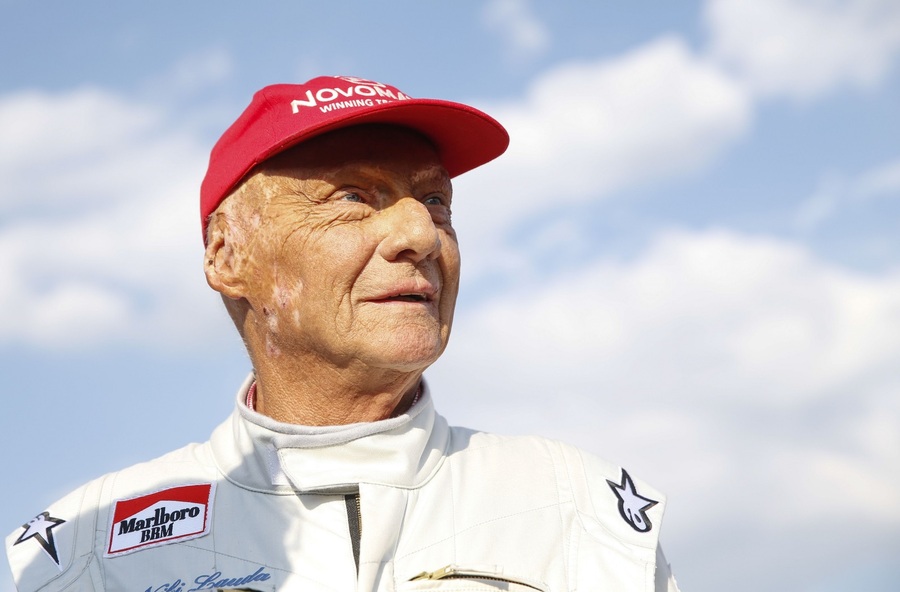 During the Japanese Grand Prix, Niki dropped out of the race after two laps, saying he didn't feel safe driving in torrential rain, and this affected his relationship with Ferrari. He left the Ferrari team during the 1977 season and joined the Brabham-Alfa Romeo team in 1978. While practicing for the 1979 Canadian Grand Prix, Lauda announced that he was no longer interested in continuing "the silliness of driving around in circles" and was retiring immediately. He came out of retirement in 1982 after being offered a $3 million salary to join the McLaren team. Niki won the 1982 Long Beach Grand Prix and 1984 Monaco Grand Prix, then broke his wrist while practicing for the 1985 Belgian Grand Prix. At the end of the 1985 season, Niki retired from racing for good. He took non-racing roles with several Formula One teams after his retirement, such as a consulting role with the Ferrari team in 1993 and a non-executive chairman role for the Mercedes AMG Petronas team in 2012. In 1993, Lauda was inducted into the International Motorsports Hall of Fame, and the Austrian post office honored him with a stamp in 2005. Niki was ranked #22 on ESPN.com's 2008 list of the top 25 drivers of all time.

Business Ventures: In 1979, Niki founded a private airline called Lauda Air. He sold the airline to Austrian Airlines in 1999, and in 2003, he founded another airline called Niki, which merged with Air Berlin in 2011. In 2016, Lauda took over a charter air company called Amira Air and renamed it LaudaMotion. Niki held a pilot's license and flew planes well into his 60s.

Personal Life: Niki married Marlene Knaus in 1976, and they welcomed sons Lukas (born in 1979) and Mathias (born in 1981) before divorcing in 1991. Mathias followed in his father's footsteps and became a race car driver, and Lukas managed his brother's career. In 2008, Lauda married Birgit Wetzinger who worked as a flight attendant for his airline. The couple had twins Mia and Max in 2009, and Niki also had a son named Christoph (born in 1982) with an ex-girlfriend. In 1997, Lauda underwent a kidney transplant, thanks to his brother, Florian. After the kidney he received from Florian failed, Birgit donated a kidney in 2005. In 2018, Niki underwent a lung transplant.

Death: In May 2019, Lauda was receiving kidney dialysis at the University Hospital of Zürich, and on May 20th, he died in his sleep at age 70 surrounded by his loved ones. A few days later, at the 2019 Monaco Grand Prix, drivers and fans wore red caps in Niki's honor, and the Mercedes team painted their car's halo safety device red and adorned it with a sticker reading "Niki we miss you." Lauda's funeral took place at Vienna's St. Stephen's Cathedral and was attended by Arnold Schwarzenegger, President of Austria Alexander Van der Bellen, and several Formula One drivers, including Jackie Stewart, Lewis Hamilton, and Jean Alesi.