Trae Young Net Worth and Salary: Trae Young is an American professional basketball player who has a net worth of $20 million. During his college career, Young tied an NCAA Division 1 single-game assist record with 22. He also became the only player to ever lead the NCAA in both points and assists in a single season. Trae played his freshman year at the University of Oklahoma and was then drafted into the NBA with the fifth overall pick in the 2018 NBA draft.

Early Life: Young was born on September 19th of 1998, in Lubbock, Texas. Trae is the son of Rayford and Candice Young. He grew up in Norman, Oklahoma, and has a younger brother named Tim and two younger sisters, Caitlyn and Camryn. He attended Norman North High School but did not begin playing basketball until his sophomore year. In his first season, Young averaged 25 points per game, led Norman North to a championship title, and was named Oklahoma's Sophomore of the Year.

In his junior year, Trae improved his game and helped the team achieve a 28-4 record, win the regional title, and place second in the 2016 Oklahoma Class 6A championship game. In his senior year, Young was averaging 42.6 points per game and was named Oklahoma's Player of the Year by numerous sources. In 2017, Young enrolled at the University of Oklahoma.

Trae began his freshman year, with outstanding performances, which continued throughout the season. After a game where he recorded 43 points and seven assists, many compared him to the likes of Stephen Curry. A few games later, he tied the NCAA single-game assists record with 22. Young finished his freshman season leading the country in most of its main statistics, including points, assists, points per game, and assists per game. 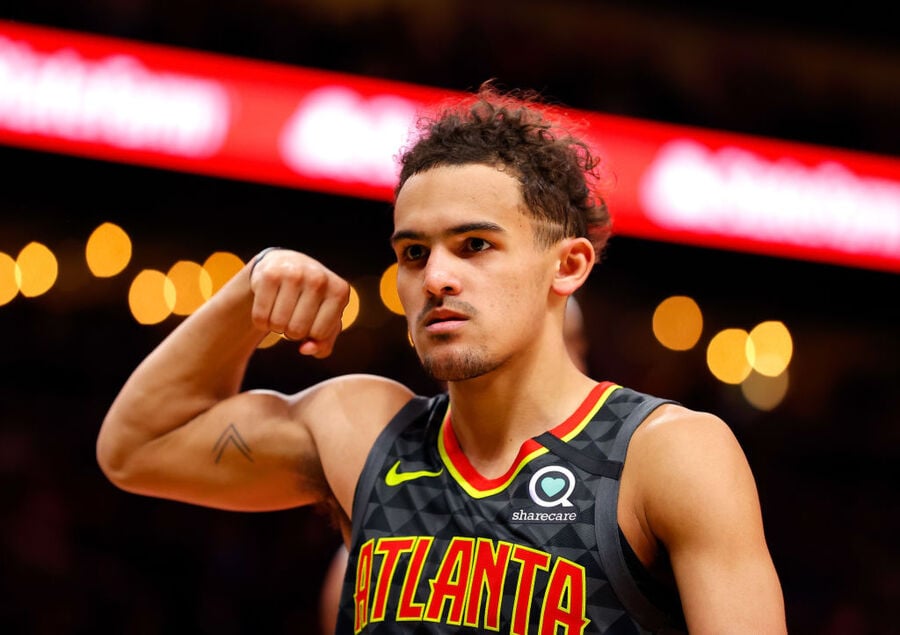 Oklahoma made the NCAA big-12, but they lost in overtime to the Rhode Island Rams. Trae was named the Big 12's Freshman of the Year and was a member of the All-Big 12's First Team. He also broke the Big 12's conference record for points scored in a season by a freshman player and won the Wayman Tisdale Award for National Freshman of the Year. After the Sooners' loss in the NCAA Tournament, Young announced that he was entering the 2018 NBA draft.

Career: On June 21st of 2018, Trae was selected by the Dallas Mavericks with the fifth overall but was then traded to the Atlanta Hawks along with a future first-round pick in exchange for Luka Dončić. In July, Young officially signed with the Hawks. In October, in Atlanta's third game of the season, young scored 35 points and 11 assists in a 133-111 win over the Cleveland Cavaliers. He then set a season-high record on March 1st, where he scored 49 points and 16 assists in a 168–161 quadruple overtime loss to the Chicago Bulls. Although Trae helped the Hawks win more games than the year before, they failed to make the playoffs.

In the first game of the 2019-20 season, Young scored 38 points in a win against the Detroit Pistons. In January of 2020, he was selected for the NBA All-Star selection as a backcourt starter. Trae continued to have stand-out games, and on February 20th, he scored a career-best 50 points in a win against the Miami Heat, hitting 8-of-15 three-pointers. After an impressive year by Young, the Atlanta Hawks were still unable to earn a place in the playoffs.

Supermax Contract: In August 2021, Trae singed a $207 million, five-year supermax contract with the Atlanta Hawks. Technically the base contract level is $172 million, but it includes a 30% escalator clause that boosts the value to $207 million if Trae makes one of the three All-NBA teams.

Real Estate: In 2019, it was reported that Trae purchased a home in Norman, Oklahoma, for $1.5 million. The house is 8,100 square feet with five bedrooms, six bathrooms, a massive kitchen, and an outdoor pool.