John Daly Net Worth and Career Earnings: John Daly is an American professional golfer who has a net worth of $2 million. His net worth should be much, much higher but John has lost tens of millions of dollars over the years, mostly due to a terrible gambling problem but also thanks to multiple divorces. More on this later in this article.

Also known as "Long John" Daly for his exceptional driving distance, Daly is known for his controversial incidents, his one-of-a-kind attitude, and his incidents off the golf course.

Early Life: John Patrick Daly was born on April 28th of 1966 in Carmichael, California. Raised in a middle-class household, John moved about frequently across various southern states as a child. He first started playing golf when the family settled in Arkansas. Inspired by Jack Nicklaus, Daly began to take his golf career more seriously and won a number of championships as a teen.

Career: John Daly turned professional in 1987 and won his first victory at the Missouri Open of that year. In 1990, he won the Ben Hogan Utah Classic. By 1991, he had won his first PGA Championship. This caused a widespread frenzy in the golf community, as Daly was a serious underdog. A solid season in 1992 followed, and in 1993 he placed third in the Masters Tournament. Unfortunately, Daly was suspended in 1994 for walking off the course mid-round. This caused him to enter rehab for alcohol abuse.

In 1995, John won the Open Championship before a long period of issues throughout the next five years. His drinking habits were beginning to catch up with him, and it was affecting his performances on the golf course. In 2001, Daly won the BMW International Open, sparking a comeback. More wins came throughout the next two years before John truly marked his return to glory with a win at the Buick Invitational in 2004. After a disappointing 2005, Daly returned to somewhat disappointing form throughout the next nine years.

Due to his non-exempt status, Daly had to rely on sponsorships and invitations to certain events. This is despite the fact that he has earned millions during his golf career. In 2016, John became eligible to play on the PGA Tour Champions. He started to win events after this for the first time in many years. As of 2020, Daly continued to compete in the Champions Tour. 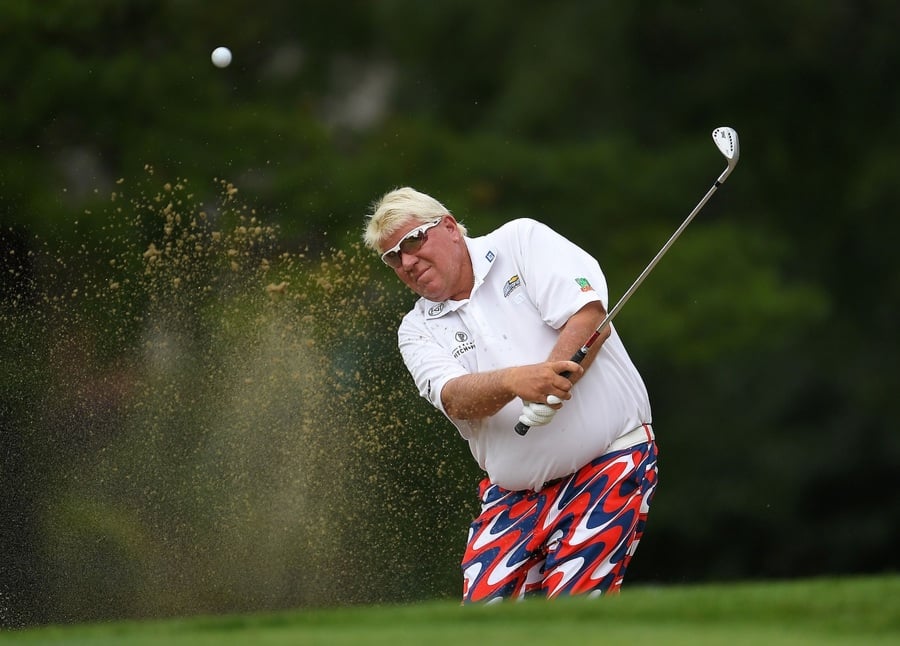 Relationships: John's first wife was Dale Crafton. They were wed in 1987, they divorced three years later. In 1992, Daly remarried to Bettye Fulford. Over the course of their relationship, they have had one child together. That year, Daly was charged with third-degree assault after throwing his wife into a wall. Bettye chose not to pursue the matter legally, and the exact details of the incident have never been revealed. Daly and Fulford ultimately divorced in 1995.

John then married Paulette Dean, and the couple had a child together in 1995. Four years later, they had finalized their divorce. In 2001, John married his fourth wife, Sherrie Miller. Two years later, they had welcomed a child into the world. In 2007, both spouses were involved in an altercation at a restaurant in Tennessee. John alleges that Miller attacked him with a steak knife.

Authorities were called to their home, but Sherrie had already fled with their young son. After Daly's wife was tracked down, she pleaded guilty to federal drug charges and was sentenced to five months in prison. Daly was eventually awarded custody of the child, and Sherrie was sent back to jail for interfering with John's visitation rights and other offenses.

Business Ventures: Daly has an endorsement deal with Loudmouth Golf, a clothing line. In 2014, he signed another deal with Rock Bottom Golf, a discount golf store. Other ventures include a wine label called John Daly Wines (which eventually went out of business), and a golf course design company called JD Designs. To date, JD Designs has designed courses in California, Ireland, Canada, Missouri, and Arkansas. Daly also appeared in the video game "Prostroke Golf."

Music: Somewhat surprisingly, John Daly has been quite active in the music industry over the years. In 2007, he contributed vocals to Kid Rock's track "Half Your Age." He has released a number of albums over the years, including "I Only Know One Way," which was released in 2010. This album includes collaborations with singers such as Darius Rucker. His first album was "My Life," and it featured guest vocals from Willie Nelson and Johnny Lee.

Substance Abuse Issues: In 1994, John Daly famously claimed that most of the players on the PGA Tour were cocaine users and that he would be one of the "cleanest" players if there were widespread drug testing. Despite these claims, Daly has struggled with substance abuse in the past. In 2008, his swing coach abandoned him after growing frustrated with Daly's drinking problem. That year, he was found drunk outside of a Hooters restaurant. Although he wasn't arrested or charged with a violation, John's mugshot was released to the public, causing a media frenzy.

This incident caused Daly to "shape up" and quit drinking. This caused a notable improvement in his golf performances. In a 2014 interview, John admitted that his drinking problem was largely caused by memories of his abusive father, who was an alcoholic.

Health Issues: John Daly has struggled with a number of health issues over the past years. In 2009, he underwent lap-band surgery to limit the amount of food he was able to eat. This resulted in him losing 100 pounds. Previously, he was overweight and suffering from a number of health issues as a result. In 2019, Day almost died when he was bitten by a brown recluse spider. After developing sepsis, Daly underwent emergency surgery and survived.

In 2002, John Daly revealed that he had been diagnosed with bladder cancer. He also admitted that he had been battling the illness for a significant period of time in the past, although he had surgery to remove the cancer. While the surgery was successful, doctors warned that there was an 85 chance of a relapse. In order to limit the chance of this happening, Daly announced that he planned to stop smoking and quit drinking Diet Coke.

Financial Issues: In 2006, John Daly wrote in his autobiography that he had struggled with a gambling addiction in the past. This addiction has seriously whittled away at Daly's wealth, and he claims to have lost more than $50 million dollars over the course of his life. He specifically mentioned one particular incident when he lost $1.5 million in October of 2005 at a slot machine in Las Vegas.

Legal Issues: In 2005, John Daly attempted to sue the "Florida Times-Union" for libel. This was in retaliation for a columnist who referred to John as a "scoundrel." Unfortunately, a judge threw out Daly's case in 2009 because he was unable to prove that the statements made by the columnist were untrue. As a result, John was forced to pay the newspaper more than $300,000 in legal fees.