The 11 Most Expensive Homes Ever Sold In The United States

They say that home is where the heart is. Well, if you own one of these homes, you must have a very big heart… and a ginormous bank account. The current price of the average American home is a little less than $250,000. That $250,000 wouldn't be enough to buy a shoe closet in the mansions below.

These are the most expensive homes that have ever sold in the United States.

FYI, if you bought a house for $100 million today with a 30 year loan at 4% interest and 20% down, you would be looking at a monthly payment of $381,932 dollars. You would also have a massive property tax bill every year. In many states, your annual property taxes on a $100 million home would be around $1 million.

Here are the most expensive homes that have ever sold in the United States:

On November 27, 2012, an anonymous billionaire paid $117.5 million to buy a nine acre estate in Woodside, California. The property sits on top of a hill in the heart of Silicon Valley and features 360 degree views of the Woodside Mountains. Built in 2005, the main house alone is 8,900 square feet. A Los Angeles law firm purchased the home for a client using an LLC called "SV Projects".

It was later alleged that the anonymous buyer behind that LLC is Masayoshi Son, the founder and CEO of SoftBank. Masayoshi Son is worth $18.4 billion today, but might be more famous for setting the record for most money lost in human history. During the original dotcom bubble burst, Masayoshi saw his personal net worth plunge from a peak of $75 billion to an all time low of $1.1 billion.

Candy Spelling, the widow of late TV producer Aaron Spelling, originally listed their absolutely enormous custom-built mansion for $150 million. The house languished on the market for a few years before it was purchased by Petra Ecclestone for $85 million. Petra was 23 years old at the time. Petra listed the 123-room property at one point for $200 million. It took a while for her to find a buyer, but finally she sold the palace for $120 million in July 2019.

In May 2013, an absolutely stunning property in Greenwich, Connecticut went on the market for a mind-boggling $190 million. Almost exactly a year later, a buyer agreed to purchase the 50 acre estate for the low-low price of $120 million. The main house alone is 15,000 square feet. The driveway of this property is 1,800 feet long. It was originally built in 1898 by one of the co-founders of Andrew Carnegie's US Steel corporation. It was then sold to a lumber magnate in the 1980s. Amazingly, the person who purchased the house recently will be only the third owner in over 115 years.

The mansion sits on a 50 acre property that is mostly open fields and forest. It features multiple grass tennis courts, sprawling gardens, two greenhouses, a private apple orchard and a 75 foot heated pool with hot tub that overlooks the Long Island Sound. The property nestled on 4,000 feet of water views and private beaches.

In February 2021, a private equity specialist named Scott Shleifer paid $122.7 million for a mansion in Palm Beach, Florida. Currently the most-expensive home ever sold in Palm Beach and Florida history, the land was once owned by Donald Trump. The current home was built on spec and Scott is the very first owner. As much as $140 was actually transferred with the purchase when you include furnishings but the registered price for the home itself was $122.695 million.

In September 2020, Quibi founder Jeffrey Katzenberg sold his Beverly Hills mansion to Whatsapp founder Jan Koum for $125 million. The 6.4-acre estate boasts 27,000 square feet of living space, five bedrooms, and 13 (!) bathrooms. It's located in the exclusive Beverly Hills community of Trousdale Estates. Katzenberg purchased the property in 2009 for $35 million, but tore down the existing house and built the current one, designed by architect Howard Backen.

Jan Koum owns roughly $400 million worth of real estate in California alone. Roughly 30 minutes from his Beverly Hills property, he owns two side-by-side mansions in Malibu. He paid $80 million for one and $100 million for the other.

In November, 2012, real estate billionaire Stan Kroenke paid $132.5 million in cash for the 124,000 acre Broken O Ranch in Augusta, Montana. Kroenke, who owns the St. Louis Rams, Denver Nuggets and Colorado Rapids, is worth $5.6 billion. The Broken O Ranch is an enormous property that actually took more than 25 years to put together. It's a working ranch that produces 700,000 bushels of grain and 25,000 tons of hay every year. It also is home to more than 5,000 cows.

In addition to being a fully functioning production ranch, the property also has a luxurious 10,000 square foot mansion that has gorgeous views of the rocky mountains and a nearby river. It should be noted that there is a bit of a debate over whether or not the Broken O Ranch should be considered one of the most expensive homes ever sold in the United States. Some believe that the ranch is more of a commercial property that happens to have a luxury home plunked down in the center.

On April 2, 2021, a 42-acre estate in Southampton with more beach-frontage than any other private residence on Long Island, sold for a whopping $145 million. Originally listed for $175 million, the seller was a financier named Brenda Earl, who bought the estate in 2002 for $21.75 million. The property was originally developed in 1960 by Henry Ford's grandson, Henry Ford II, aka "Hank the deuce".

Hank lost the house in a divorce settlement a few years later. Henry's ex-wife sold the home in 1978 to an Italian financier named Carlo Traglio. Carlo sold to Brenda in 2002. It's unclear as  of this writing who bought the property in 2021 from Brenda.

On May 3, 2014 it was revealed that a hedge fund manager named Barry Rosenstein spent $147 million to purchase an absolutely stunning estate in East Hampton. This is the most-expensive home sale in Hamptons history. For about five years it held the record for most expensive house ever purchased in the United States.

Rosenstein is the founder of hedge fund Jana Partners which managed $11 billion at its peak in 2011. In 2013, his fund reportedly delivered a 23% return. Rosenstein earned more than $140 million in salary and bonuses that year.

If you'll notice, this record setting transaction occurred less than two weeks after the $120 million Greenwich mansion on this list. Little is known about the specific details of this East Hampton house. 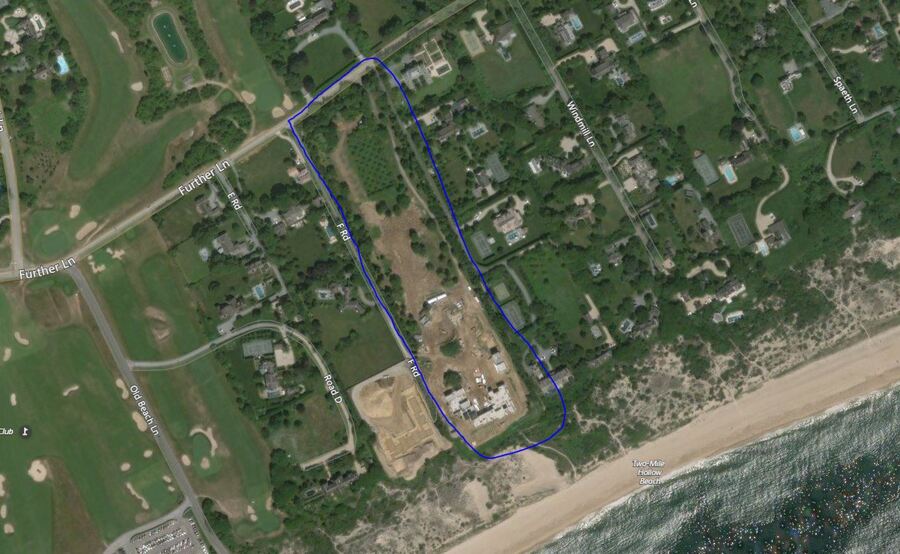 In May 2017, a billionaire named Jerry Perenchio died at the age of 86. Jerry earned his multi-billion fortune as the owner of Spanish-language media empire Univision.

A few months after his death, Jerry's heirs listed his longtime home in Bel-Air, California, for a whopping $350 million. A year later they dropped the price to $245 million. Then they dropped it to $195 million.

Finally in December 2019, the home was purchased for a cool $150 million by Rupert Murdoch's billionaire son Lachlan Murdoch.

The Chartwell Estate is 10-acre palatial estate located in the heart of Bel-Air with nearly 360-degree views of Los Angeles. It was built in the 1930s then quickly abandoned during the Great Depression. Between 1962 and 1971, Chartwell gained fame for being included in the opening credits of the TV series "The Beverly Hillbillies". So it was the fictional house of the Clampett family.

Jerry Perenchio bought the property for an unknown price in the 1980s. At the time of his death, Jerry was paying $1.3 million in annual property taxes related to the house. The new owner, Lachlan Murdoch, will have to earn $3 million every year pre-tax, to cover the $1.5 million property tax bill.

On February 12, 2020 it was revealed that Jeff Bezos – the richest human in the world – had plunked down $165 million for the 10-acre Jack L. Warner estate in Beverly Hills. He bought the home from entertainment mogul David Geffen who himself bought it in 1990 for $47.5 million. 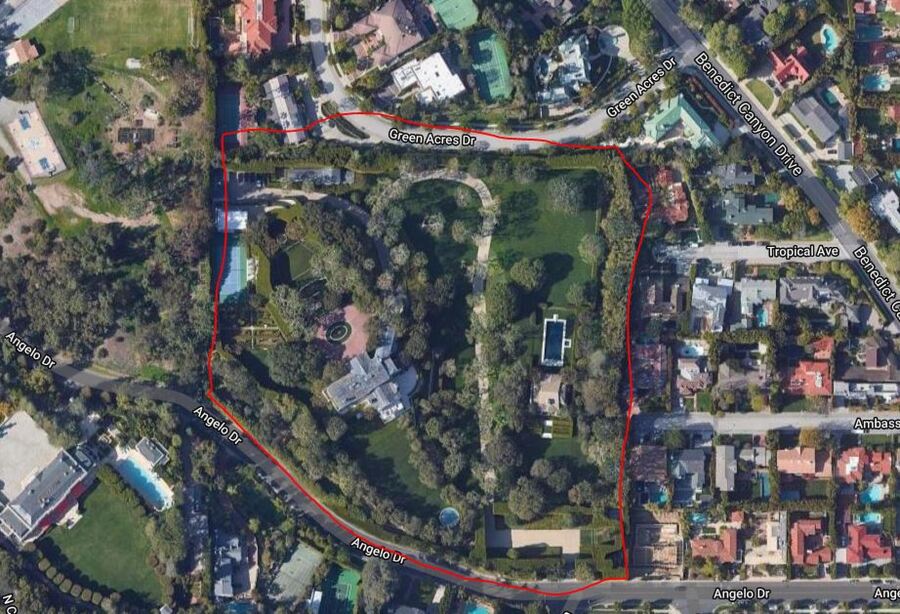 But that wasn't Jeff's only purchase!

On the same day he ALSO plunked down $90 million for a 120-acre plot of undeveloped land on the top of Beverly Hills that was previously owned by the late Microsoft billionaire Paul Allen. In total, Jeff spent $255 million in a single day to scoop up 130-acres in Beverly Hills. There is not yet any structure on the Paul Allen parcel, which is known as Enchanted Hill. The driveway alone is 1.2 miles long. It will be amazing to see what Jeff builds here!

which is known as Enchanted Hill

On October 28, 2021 it was revealed that venture capitalist Marc Andreesen paid $177 million for a seven acre property on a cliff in Malibu, California. The seller was fashion executive Serge Azria and his wife Florence. They paid $41 million for the property in 2013 then proceeded to perform a massive and expensive top-to-bottom renovation. Andreesen, who made his first fortune as the creator and co-founder of the Netscape internet browser before becoming a venture capitalist and board member of Facebook, sets a California record with purchase. The late film producer Jerry Weintraub previously owned the home. He bought the first of the eventual two parcels in 1978. That four-acre parcel cost $950,000. Then in 1980 he bought 2.25 acres next door for $450,000. At one point Jerry had been seeking $75 million but ultimately accepted the Azria's $41 million offer.

At $177 million, Marc Andreesen will be on the hook for a roughly $1.8 million property tax bill every year very likely an equally high annual fire insurance bill considering the location is an extreme fire danger zone.

On January 23, 2019 it was revealed that hedge fund manager Ken Griffin had purchased the top four floors of an unfinished New York City building located at 220 Central Park South. That was enough to scoop the record for most expensive home purchase in US history.

Griffin, who has a net worth of $22 billion thanks to his hedge fund Citadel, has spent a mind-boggling $700 million on personal residences in the last five years alone. He also holds the records for most expensive home purchases in New York, Illinois and Florida. For his New York City purchase, keep in mind that he bought the units without any furniture or fixtures. Basically empty units with floors and ceilings (some of which will surely be knocked down). Ken will definitely spend many many additional millions on furniture, customization and fixtures. 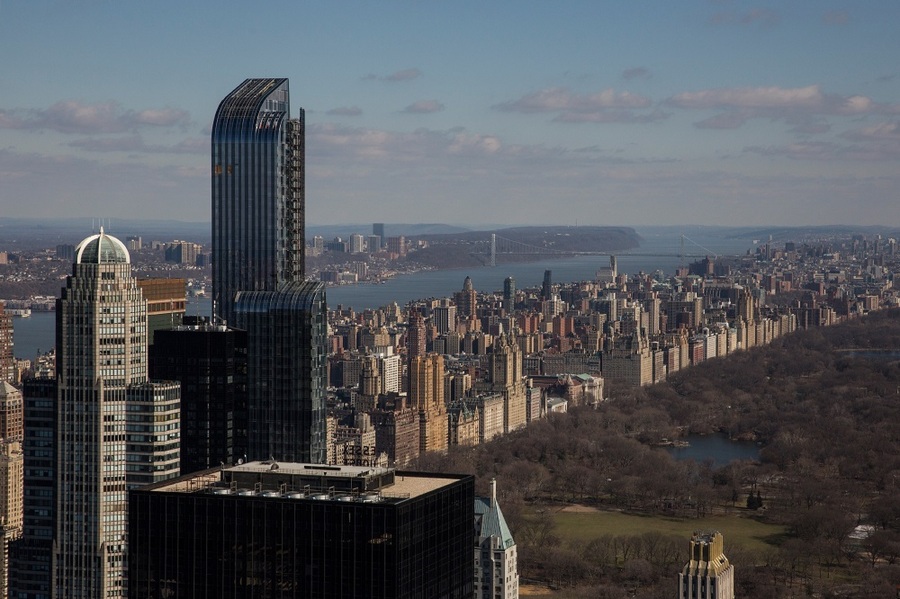 So there you have it! The five most expensive homes ever sold in the US! If you plan on owning an insane mansion like one of the ones above, I have two pieces of advice:

A) Start saving your money.

B) Wait for a recession.

This is just my opinion, obviously, but when you start seeing private houses selling for hundreds of millions of dollars, something wacky is going on. How much would any of these houses have been worth in October 2008 right after the financial crisis decimated the economy? On average, the United States has a recession at least once every 7 years. The average recession lasts 17 months followed by a little more than three years of expansion. If you want to live in an insane mansion some day, save up a ton of money, wait for huge market downswing then strike. It will happen eventually…