President Obama's Car: The President Takes an Electric Car for a Spin… Around the South Lawn

With the 2012 election right around the corner, President Obama has been shifting between running the country, and campaigning to continue running it, almost non-stop since the beginning of the year.  It has made for a ridiculously hectic schedule, with very little time to rest.  With both the Democratic and Republican campaigns ramping up, as the November elections are just around the corner, President Obama's schedule is growing even more jam packed.  His focus of late has been on the aftermath of Hurricane Sandy, in addition to the usual maelstrom of issues comprised of international politics, the housing and debt crises, women's rights, gay rights, student loan debt, and who knows what else.  However, just before a recent interview with Jay Leno, he got to have one brief moment of downtime.  After a family friend offered him a chance to test out a Chevrolet Volt, the Commander in Chief managed to drive it three times around the South Lawn driveway before Secret Service stopped him. 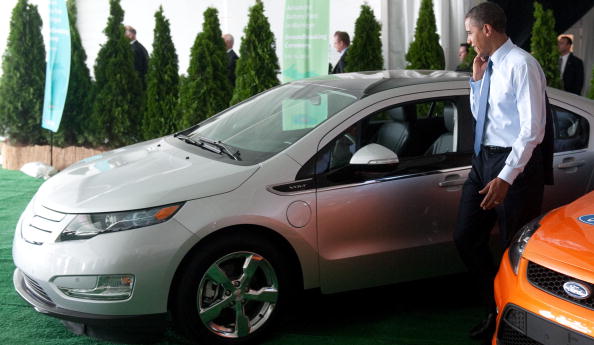 The Chevrolet Volt has won numerous awards from various environmentally-focused design organizations, including the 2009 Green Car Vision Award and the 2011 World Green Car Award.  The car is a 5-door hatchback that runs on a 16 kWh lithium-ion battery, which can be recharged via plug-in.  Once the battery gets below a certain threshold, the car switches over to running on a combustion engine.  The brakes use regenerative power technology to recharge the battery, as well.  The 2012 model can run for about about 35 miles without the use of gas, and the generator can produce enough electricity for the car to continue running for almost 380 miles.  The European version of the vehicle, known as the Europa or Ampera, can go almost 52 miles without gas.  The 2012 Chevrolet Volt is priced at just under $40,000 and is an almost silent driving experience.  Those three trips around the South Lawn must have been the quietest few moments President Obama has had all year.

OJ Simpson Net Worth: Everything You Need To Know About The Juice's Finances As He May Be Paroled

Why On Earth Did This NBA Player Voluntarily Take An 88% Pay Cut Next Season??? His Answer Is Interesting…

Oprah Has Already Made A Total Of $300M From Weight Watchers

Amazing Car Of The Day: The BMW i8